OBITUARIES – MY, HOW THEY’VE CHANGED… 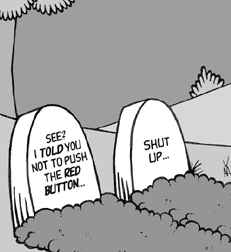 The obituary of the renowned theatre producer and award winning television and radio writer Harold Lander in the Sydney Morning Herald on 24 July 2015, was a classic – partly because it was much influenced by the dead man himself. 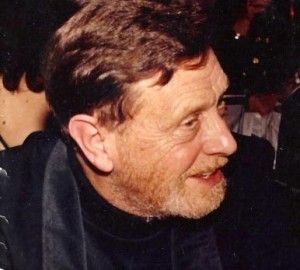 Harold Lander – who died, not ‘passed away’

He had instructed his family to be economical in the way they worded his death notice. ‘Newspapers charge by the number of words, so the fewer words the better. Just the name and age. Note I will have died (one word) not passed away (two words). Forget all the crap about beloved husband or, affectionate father of, fantastic grandfather of, etc. Whether I died quietly, peacefully or screaming blue bloody murder is nobody else’s business.’

Fittingly, the author of Lander’s obituary, one of his two daughters Sara, ended her tribute to her dad saying that he would be ‘thrilled to know that this obituary means they [his family] haven’t had to pay for a death notice’.

It is tremendously uplifting to know that not only Lander had not ‘passed away’, or ‘on’ or ‘over’, he had not been ‘lost’ (which sounds careless), or was ‘in God’s hands’, ‘entered into the fuller life’, or like the famous dead parrot in the Monty Python sketch merely, ‘resting’ – he had simply ‘died’.

This accords well with the Bowden family’s view on funerals. Put simply, we don’t ‘do’ them. When my mother Peg died in Hobart in 1982, my father arranged for a cremation and told the undertaker that no one would be there, but to ring him when the job had been done. The Bowden family, assembled in the family home, then toasted Peg and her life, and that was that.

When my father John Bowden died 16 years later in 1998 at the respectable age of 91, he ‘woke up dead’ in his own bed, in his own house, with his glasshouse full of home-grown tomatoes, thereby bypassing the entire aged care system – which would have pleased him enormously. He had not been terribly thrilled about reaching 90, certainly not wanting a telegram from Her Maj at his centenary, and forecasting quite accurately that the coming decade was not going to be as good as the last. (He did cheer up for a rather jolly 90th birthday bash.) He had already given up his driving license because of some mini-strokes, and knew he was unlikely to be able to look after himself much longer, which meant going in to some kind of aged care home – which he dreaded. 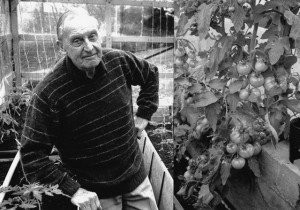 Again there was no funeral. I flew down from Sydney, and with the approval of my two younger brothers and sister, rang the undertaker to organise the cheapest possible cremation possible. A cardboard coffin would be just fine, I told him, but he said the rules would not allow this, and it would have to be a rosewood coffin. ‘OK, I said, ‘If you must, but no one is going to be there at the crematorium’. We did have plans for his ashes, and said would like them afterwards – of which more in a moment.

We knew Father welcomed the idea of a good wake, and we had a corker. The house was filled with joyous laughter, remembering, and quite a few drinks. There were people there who had known him in his working days, as a sales manager for Holdens at Motors Pty Ltd, and many friends – although having lived so long, there were few of his own age-group left. In the midst of all the jollity, the doorbell rang. My brother Philip answered the call, and the undertaker was standing on the front doorstep holding, what looked like a shoebox, full of John’s ashes. Philip stashed them under his bed, and the party went on.

Afterwards we all thought that John Bowden had never liked to miss a good party, and had arranged to arrive in the manner that he did.

(Bizarrely, a week later, the undertaker who had brought what was left of him to the wake, died suddenly.)

John Bowden’s ashes were scattered literally far and wide. Some were scattered in the waters off Spring Beach, where he had built the family weekender off the East Coast of Tasmania, looking out towards Maria Island. The turquoise blue water and brilliant sunshine reminded him of an ancient town of Askelon on the shores of the Mediterranean, where he was stationed for a time in Palestine during World War II. He named the ‘shack’ – the vertical weatherboard dwelling with an asbestos roof, but with million dollar views – Askelon. 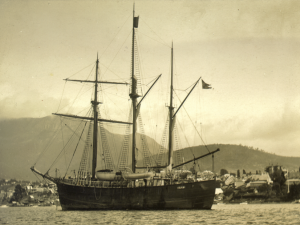 Fram anchored in Hobart’s Derwent Estuary, the first port of call since leaving Antarctica after the successful assault on the South Pole 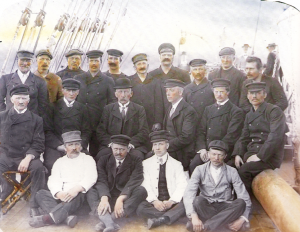 Fram’s crew on the deck of Fram in Hobart. Amundsen is sporting the bowler hat

But that wasn’t the end of it. John Bowden had always wanted to visit Antarcarctica. His father, Frank Bowden, was the Manager for Telegraphs in Hobart when the Norwegian polar explorer, Roald Amundsen, sailed quietly into the Derwent Estuary in the double-ended wooden schooner Fram, after having beaten Robert Falcon Scott to the South Pole. Frank Bowden personally organised the telegram from Amundsen to King Haakon of Norway, revealling that he had beaten Scott to the Pole. For some three days, he was the only person on earth other than the ship’s company to know this until the English newspapers published the story.

After Peg died, John Bowden did actually book his passage on one of the early tourist voyages to Antarctica in the late 1980’s organised by Dick Smith on the passenger ship Lindblad Explorer. But the ship was sold to new owners and the voyage was cancelled. Father never made it south. But I did, several times, as a chronicler of the history of Australians in Antarctica, and on several tourist voyages as a guest lecturer. 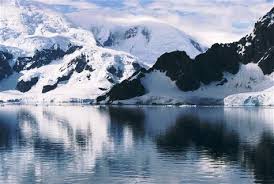 After John Bowden’s death, I took some of his ashes in a small film cannister, and one fine evening in Paradise Bay on the Antarctic Peninsula, surrounded by snow-capped peaks and lying in glass-calm water with broken pack ice around our ship Polar Pioneer I gathered some voyagers on the foredeck with glasses of single-malt whisky, explained what I proposed to do and why, and poured some of Father’s ashes through one of the hawse holes into the red sunset- tinted waters of Antarctica. 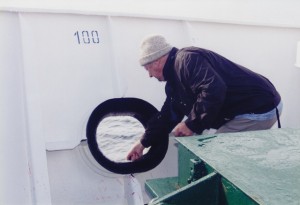 Some of Father’s ashes reach Antarctica 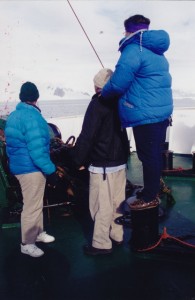 A moment of quiet contemplation

Father didn’t score an obituary in the local paper, The Mercury, in Hobart. However I am sure he would have applauded the way the pendulum has been swinging towards less stuffy panegyrics in recent years in the production of obituaries. Refreshing candour may have come earlier in England than the Antipodes. A friend sent me the obituary of one Simon Raven – headlined ‘Promiscuous chronicler of upper-class life’ – from the Guardian, circa 2001, and he commented: ‘You don’t see obits like this in Australian papers.’

Allow me to share some of Michael Barber’s assessment of Mr Raven. 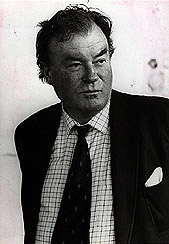 ‘The death of Simon Raven at the age of 73 after suffering a stroke, is proof that the devil looks after his own. He ought, by rights, to have died at shame at 30 or of drink at 50. Instead he survived to produce 25 novels, including Alms for Oblivion, a 10-volume saga of English upper class life, numerous screenplays, eight volumes of essays and memoirs, including Shadows On The Grass, ‘the filthiest book on cricket ever written’ according to E W Swanton…’ and his obituarist Michael Barber was simply warming up!

The most positive thing that Barber reveals about his raffish subject is his love of the classics, which Raven apparently read in the original every day. His childhood, though, ‘reads like a Victorian cautionary tale gone wrong. He is the golden youth whose high promise is betrayed by his base appetites, so that one door after another is closed to him’.

Barber goes on: ‘He later claimed to have been “deftly and very agreeably” seduced by the games master at his preparatory school, but acquired his Luciferian reputation as a scholarship boy at Charterhouse school, before he was expelled in 1945 for serial homosexuality. According to his contemporary, Gerald Priestland, he “trailed an odour of brimstone”.’

His last two years at Cambridge University, wrote his merciless chronicler, were over-shadowed by depts and dissipation. ‘In 1951 he married Susan Kilner, a fellow undergraduate, who was expecting his child; afterwards, he studiously avoided her, and they were divorced in 1957. After failing to submit a single word of his fellowship thesis, he withdrew from King’s College and desperate to flee “the pram in the hall”, successfully applied for a regular army commission.’ 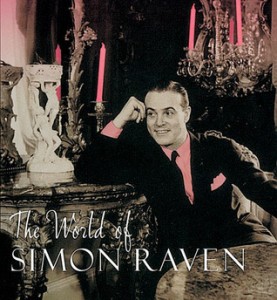 And on it goes… ‘His considerable earnings went on food, drink, travel, gambling and sex…’ And Barber concludes: ‘Tall slim and beautiful as a youth, Simon soon lost his looks and his figure.

Simon Raven devised this epitaph for himself: “He shared his bottle – and, when still young and appetising, his bed”.’

Of course the journalist Jeffrey Barnard, bibulous chronicler in his ‘Low Life’ column in the Spectator, went one better. Shortly before he drank himself to death in 1999 he wrote his own obituary, in which was a description of his early life.

‘His drinking began to escalate to such an extent that he was unable to hold down the most ordinary job and he was consequently advised to take up… journalism.‘

Spike Milligan famously suggested the epitaph he wanted on his tombstone: ‘I told you I was ill’. There was a row about it, but the epitaph was inscribed – in Gaelic! Spike would have liked that I think.