OBITUARIES – MY, HOW THEY’VE CHANGED… THE REMARKABLE ABORIGINAL ROCK ART OF MT BORRADAILE

ABANDONED AT FOSSIL BLUFF – A remarkable account of Antarctic survival 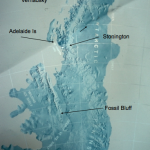 The Fossil Bluff summer hut was on the shores of King George VI Sound, 400 kilometres from the main BAS Base Stonington on Adelaide Island.

In the summer of 1967-68, Rod Ledingham was with the British Antarctic Survey (BAS) on the Antarctic Peninsula. High on the polar plateau, he was assisting a geologist, replacing an injured colleague who had to be evacuated. Ledingham had been flown in by a light aircraft, but after their field work had ended, the aircraft crashed on take-off, fortunately with no casualties to the three men and eight husky sledge dogs on board.

With no replacement aircraft available, and communications basic to say the least, the surveyor, his temporary assistant and the pilot had to use Ledingham’s dogs to sledge nearly 300 kilometres down a glacier never before traversed, to a small hut at Fossil Bluff on the coast, where two other BAS personnel were waiting to be flown out. So began a year of basic survival, with five men in a summer-season hut designed for four, minimal fuel for cooking, no extra clothing and barely enough food. 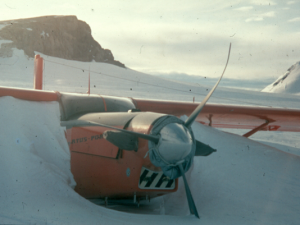 High on the polar plateau, thje forlorn sight of the Pilatus Porter, its bent propellors signalling it would never fly again 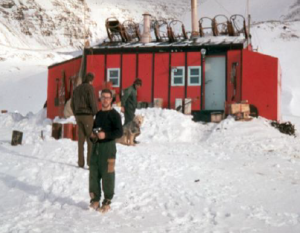 Rod Ledingham, clothes patched and re-patched waits outside the Fossil Bluff for the rescue.that never seemed to come

After 11 months of complete isolation, the aircraft sent to pick them up got lost in bad weather, and remarkably managed to crash land on sea ice on the Weddell Sea in zero visibility without damage to aircraft or crew, with only 30 minutes of fuel remaining. 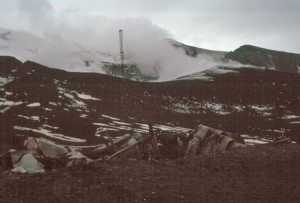 The eruption had completely destroyed the Chilean base. The heat had even melted the steel framing..

But that was not the end of the Fossill Bluff survivors’ adventures. In February 1969 a sudden and violent eruption on Deception Island, near the tip of the Antarctic Peninsula, caused the ship taking them home to England via South America was diverted to render assistance to the British at their base there, which had been destroyed by the eruption.

At Punta Arenas in the Magellan Strait, their ship was then ordered straight back to Deception Island to take two volcanologists to study the eruption, with Ledingham and his companions assisting – where he was able to capture dramatic photographs of the carnage caused by the still-erupting volcano.

It is now available as a PDF download for $10,

[wp_cart_button name=”Abandoned at Fossil Bluff” price=”10.00″]  or from the Order Form below.