I have a folder in my filing cabinet into which I throw stuff that grabs my attention – generally of a bizarre nature. Time to share some I think…

I lived in Singapore in the mid-1960s when it was a much different place. Most of the old Chinese shop-houses are torn down now and replaced by high-rise buildings. But in 1965 I took a photograph of this long-established business. 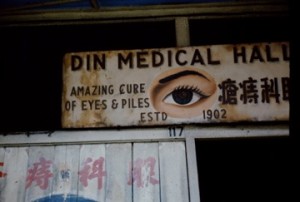 It would seem that Singaporean Chinese in the early 20th Century had continuing troubles with their eyesight and their nether regions. So it clearly made sense for this entrepreneur to establish a one-stop shop…

And talking about the nether regions, I came across this faded scrap of yellowing paper containing the instructions for a Japanese device, The Ichijiku Enema. Now I cannot say I actually owned this apparatus, but the instructions were passed to me (so to speak) by a colleague. The problems of translating Japanese and Chinese into English are legion, and the Ichijiku Enema is a case in point. First the reasons for using the device: 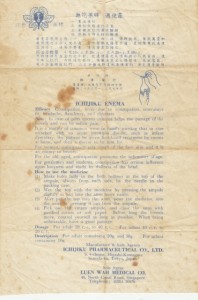 Note: It is a matter of common sense in family nursing that in case attacked with an acute intestines disease, such as infant dysentery, the patient be given first-hand treatment by enema at home, and then a doctor to be sent for.

For women, constipation gets rough of the face and is an enemy to beauty.

For the old aged, constipation promotes the infirmities of age.

For gentleman and students, constipation has serious influence on busyness and study by dullness of the head.

I think it best in the interests of delicacy to avoid spelling out the detailed instructions of how to actually use the enema apparatus, and cut to the punch-line:

Before long the bowels move, control yourself as long as possible. When being unbearable, have a good passage.

Excellent advice really, and a good philosophy of life for grumpy old persons.

But it seems that the efficacy of enemas for a variety of conditions stretches back into the 18th and 19th Centuries: 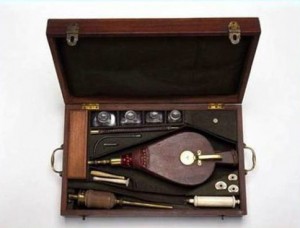 TOBACCO SMOKE ENEMA (1750s-1810s)
The tobacco enema was used to infuse tobacco smoke into a patient’s rectum for various medical purposes, primarily the resuscitation of drowning victims. A rectal tube inserted into the anus was connected to a fumigator and bellows that forced the smoke towards the rectum. The warmth of the smoke was thought to promote respiration, but doubts about the credibility of tobacco enemas led to the popular phrase, ‘Blow smoke up someone’s arse’.

I thought you would all be better for knowing that.

I have a an architect friend whose specialisation is designing buildings, and assisting others to create buildings with easy access for the disabled, and he has worked for many years with the United Nations to promote this excellent cause.

Some countries have a bit of catching up to do. When I first visited China in 1998 finding a public toilet in any shape of form was hard enough, let alone noting whether it had disabled access. Perhaps the 2008 Olympics in Beijing led to some progress in this area, but again, the problems of translating from a dictionary from one language to another is fraught with peril, which resulted in this unfortunate translation of Chinese characters indicating the existence of a disabled-friendly toilet for men:

I found it necessary to email this to my architect friend.

But in fairness to those for whom English is their first language, attention must be drawn to inaccurate signage. My occasional Grey Nomad brother Nick  and his wife Fran photographed this sign in a caravan park toilet in North Queensland. 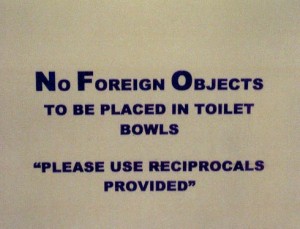 Before leaving the perennial topics arising from the smallest room, I went to Japan for my first and only visit in 1983. The Japanese Consulate in Sydney was helpful with information about the different toilet habits of the Japanese, which I feel will be useful for European visitors. 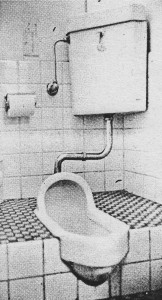 The chances are that sometime during your stay in Japan you will find yourself having to use a Japanese-style lavatory. It is not made full city down, but don’t despair.

The receptacle is usually on the raised floor. The opening is rectangular with a sort of hood over one end.

Climb up on the raised floor and stand flat-footed astride the opening with your face towards the hood. Then bend down into a crouching or squatting position, making sure that your rear is over the opening and not protruding beyond it.

The position may not be comfortable but it is sanitary because no part of your body comes in direct contact with the fixings.

In the case of the male, he urinates by standing on the lower floor and aiming for the opening. Please aim carefully.

Public latrines are few and far between and most of them are filthy. If nature calls when you are out of the streets, the best thing to do is to go to the nearest coffee shop or tearoom and invest in the cheapest drink. It won’t cost you much more than the tip you have to give to the lavatory attendant in many other countries.

And aim carefully I did. 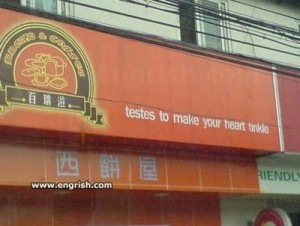 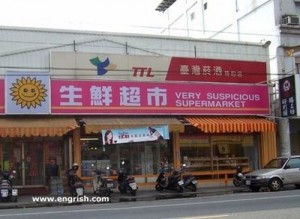 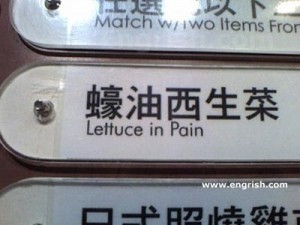 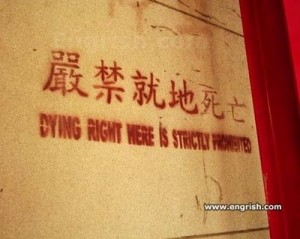 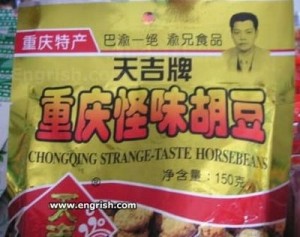 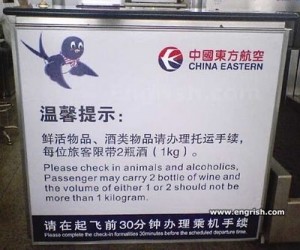 I do have one final offering. Now every man, once in his life, grows a beard. Mine was grown when I was 40, and I did find myself in Malaysia at a hotel and had myself photographed in the garden there beside a sign, which I think you will agree, had excellent advice for the male traveller in that country.

The beard did not last long following a lunch with journalist and legal so-called friends in Sydney when I got back. One, in possession of a very find clipped pepper-and-salt beard, said to me: ‘About your beard Bowden.’

It came off that very day and never returned.


If you enjoyed this article, please consider sharing it!