Antarctica And Back in Sixty Days ODDMENTS 1

There was no way I was going to miss Dame Edna’s last hurrah on the stage during her recent farewell Australian tour.

Edna Everage, the Moonee Ponds housewife, first came to my attention in the 1950s together with the lugubrious Sandy Stone, who both in their inimitable way, took the piss out of the stuffy complacent Australia of the Menzies years.

I still have two of Barry Humphries original 45 rpm records, which gave my generation such great joy in its ferociously irreverent treatment of Australia’s oh so smug suburbia. They were titled Wild Life in Suburbia, and featured Highett Fidelity, Sandy Stone’s immortal first monologue Dear Beryl, The Migrant Hostess, and another excruciating effort from the cardigan-wearing Sandy. 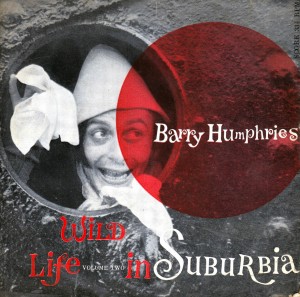 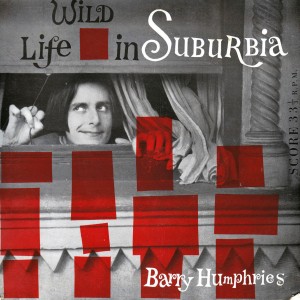 The Bulletin issued a 45 rpm record too in 1965 elegantly titled Chunder Down Under. Its sketches (with accompanying songs) were Snow Complications, and The Old Pacific Sea. 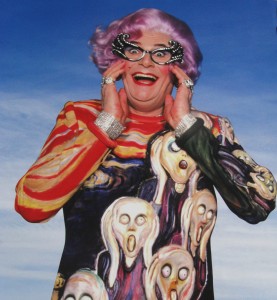 Of course by the time I saw Eat Pray Laugh in Newcastle in June 2012, Dame Edna, housewife superstar, was impossibly famous, indulging in her favourite pastime of spearing members of her adoring audience – not only with gladdies, one of which I caught at the end of the show – but with outrageous commentary on their dowdy clothes and excoriating criticism of their Gloria Soames [glorious homes].

Sandy Stone, long since dead since the 1950s, came back from the grave, as did the appalling Sir Les Patterson, that great progenitor of the Yartz, spraying the front rows of the audience with his saliva before mixing rissoles with his bare hands and cooking a barbecue on stage dressed in shorts that did little to conceal his massive personal appendage. 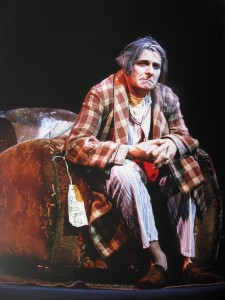 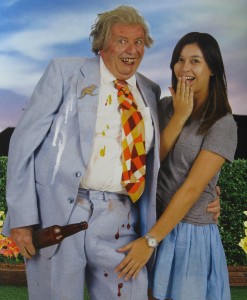 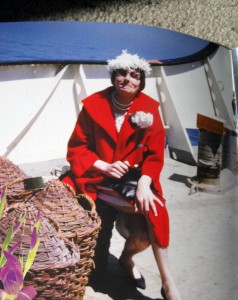 Mrs Norm Everage (as she then was) begins her Grand Tour en route to London by ship in 1959. Photo: Barry Humphries

In 1959, the then Mrs Norm Everage, did the expected Grand Tour of the day, and went to England by ship. I followed her, unknowingly, in 1960. We were both, in a sense, seeking our fortunes in London, and neither of us found the streets of the British capital paved with gold.

I finished up on the bones of my bum in a bed-sitter in Hampstead, managing to get some freelance interviewing with the BBC’s Pacific Service to keep body and soul together.

Barry Humphries was doing his best to get some theatrical work, and when we met in 1961, was understudying the role of Fagin in the London stage production of Oliver Twist. Fagin was played by the actor Ron Moody, who later also starred in the same role in the movie Oliver! screened in 1968. Doubtless aware of the formidable talents of his understudy, Moody never had a sickie in the entire time the stage production ran in London, and Barry never had a chance to show what he could do as Fagin.

Mrs Everage was also with Barry, and mindful of her Australian vinyl records that had given me so much joy, I sought out Barry to interview him/her in London.

My first interview was done for the quirky ABC Radio weekly program Scope, and broadcast in Australia. Happily I still have a copy of the tape.

Barry was gleaning material on Australians living in London, and was interested in the Aussie ghetto of Earls Court. He asked me if I knew any Australians living there, and I did know a couple of girls who shared a flat there. They knew of Barry, of course, and were delighted to entertain him. Humphries was on his best behaviour, questioned the young women about why they came to London and what they were doing with their lives there. I could see him sucking up material like a sponge!

The ABC didn’t pay very much for freelance items, and I knew the BBC rates were better. Four guineas for a five minute piece! That was one week’s rent for my Hampstead bed-sit. The BBC also paid the interviewee, so Barry was keen to give Mrs Everage another run. So was I!

The only problem was that the General Overseas Service of the BBC (now known as the World Service) existed to promote Britain’s interests overseas. My problem was to convince the producers of the BBC’s Pacific Service to accept an item effectively sending up Australians living in London, who didn’t have a high opinion of the British, particularly their beer.

The breakthrough (and I only managed it once) was to introduce the concept of ‘negative projection’. This, I explained to my puzzled producer, would show BBC listeners overseas how broadminded the British were by allowing their citizens to be sent up gutless. And this is the interview I recorded:

Alas, that was the last hurrah for the new notion of ‘negative projection’. Sadly Barry and I never met in the flesh again, but I did send him the audio on this web site some years ago  – which of course was not widely known or available – and got word back that he was pleased.

It is sad that Barry is hanging up his touring frocks for good though. Still, Mrs (later Dame) Edna Everage has had a jolly good innings as they say. And I’ll always be grateful to Barry Humphries for making the 1950s and early 60s much less boring than they might have been in the Land of Oz.. 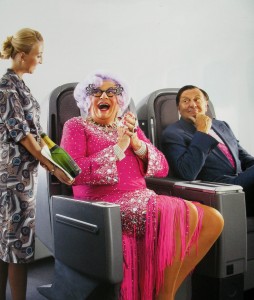 A rare glimpse of Dame Edna and Barry Humphries on tour together. Their relationship has had its ups and downs… Photo: ‘Eat Pray Laugh!’ programme 2012

IF YOU WOULD LIKE TO LEAVE A COMMENT ON THIS ARTICLE OR ANY OTHER ON THIS BLOG, PLEASE USE THE CONTACT LINK UNDER THE HEADER BAR