No Tern Unstoned Scott the Clot?

Just before World War II Australians seemed unaware that they were geographically linked to Asia, and not simply ‘British to the bootstraps’ as Prime Minister Robert Menzies later put it. There were no Australian foreign correspondents working in Asia, and Richard Hughes (and colleagues like Denis Warner) were determined to redress this balance. 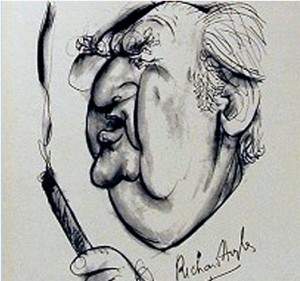 Hughes (against the wishes of his newspaper proprietor Frank Packer) went to Japan in 1940 to report from Tokyo on the growing threat of war, and returned in 1945 (still defying Packer who sacked him) to cover the Occupation under General Douglas Macarthur.

Hughes came late to journalism. He was 28 when he became a reporter on the Melbourne Star, having left school at 14 to become a boy shunter with the Victorian Railways, progressing to become the public relations assistant of Sir Harold Clapp, the head of Vic rail.

But he was always attracted to a good story, and tells hilarious tales of his time with the Victorian Railways, and indeed of his introduction to journalism in Melbourne. His achievements were legendary, but he quickly nominates his finding two of the ‘Cambridge spies’, Guy Burgess and Donald Maclean in Moscow in 1956, as his most memorable scoop. 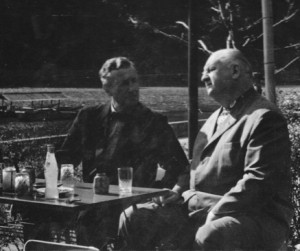 Richard Hughes worked directly to Ian Fleming, his boss at the Sunday Times. 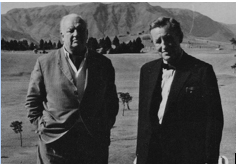 Hughes and Fleming during a tour of Southern Japan in 1959. They became good friends, and Fleming drew on Hughes’ character, writing him into his last James Bond book, as Dikko Henderson, head of Australian security in Japan. (Pictured in Japan in 1962.)

In the 1950s he began to work for the Sunday Times in London, directly to Ian Fleming, the author of the James Bond books. Fleming made several trips to the Far East researching several books, and Richard Hughes (and Hughes’ Japanese friend ‘Tiger’ Saito) travelled with him.

Fleming included both men in his last Bond novel You Only Live Twice. Hughes was the model for Dikko Henderson, the head of Australian security in Japan.

As portraying a foreign correspondent as a spook is one of the worst insults to journalistic integrity that can be imagined, Hughes (tongue in cheek) threatened to sue Fleming, who responded by telling him to go right ahead, adding, ‘If you do, I’ll really write the truth about you Dikko.’ 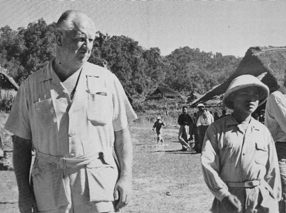 Richard Hughes in Laos in 1959 when he had his curious meeting with the Blind Bonze of Luang Prabang.

In 1975 I was lucky enough to record an extensive interview with Richard Hughes looking back at his remarkable life.

Here is an excerpt. I began by asking Hughes why his friends often called him His Eminence Cardinal Hughes:

(A two-CD set of my conversation with Richard Hughes is available through this website for $20.00 including postage.) 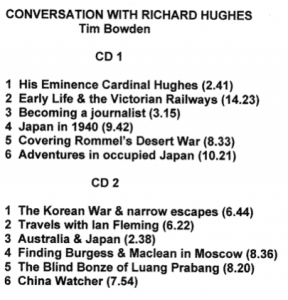