It is now 100 years since the Norwegian explorer, Roald Amundsen, nosed his little double-ended wooden schooner Fram into the Derwent Estuary and anchored out in the stream near Hobart on 7 March 1912. As it happens the Bowden family has an Antarctic brush with fame, as my grandfather, Frank Bowden, then Manager for Telegraphs at the Hobart Post Office, was entrusted by Amundsen with a coded telegram to King Haakon of Norway, with the news that he had beaten Captain Robert Falcon Scott to the South Pole.

And so, on 11 March 2012 in Hobart (which happens to be a Sunday and more convenient) I will play the role of my grandfather accepting Amundsen’s telegram on the steps of the Post Office in a public re-enactment and day of celebrations to celebrate the centenary of those momentous events.

This was a huge story, and for several days my grandfather was the only person, other than Fram‘s crew, to know of Amundsen’s first footing at the South Pole. When the news eventually came back over the wire from Europe there was enormous excitement. The arrival of Fram in Hobart was like a space ship arriving without notice in modern terms. But what had happened to Captain Scott and his men? At that stage, no one knew, not even Amundsen, only that he had got there first and left a tent at the pole with a message for Scott, claiming priority.

In 1912 Hobart photographer J W Beattie captured Fram anchored in the Derwent Estuary in Hobart, after Amundsen and his team had reached the South Pole. 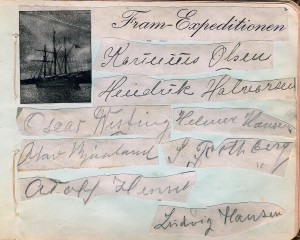 Signatures of some of Fram’s crew collected by my Aunt Nora in Hobart. then aged 12 years.

When Amundsen permitted Fram to berth at the docks in Hobart, visitors were allowed on board, including my aunt Nora Bowden, then aged 12. She managed to get some autographs from the crew, and didn’t do too badly, because she scored three of the five who had actually sledged to the South Pole.

Unhappily Amundsen was to be a short-lived hero, after Scott’s frozen body was discovered in his tent with his companions, only weeks later. Amundsen was preparing to embark on a world lecture tour with his box of glass lantern slides (most developed by Hobart’s J W Beattie) to try and get some of the money back. Antarctic expeditions in those days were mostly privately funded. But the Norwegian’s achievments were eclipsed by this discovery, overwhelmed by Scott’s elegiac diary of failure which captured the world’s imagination. 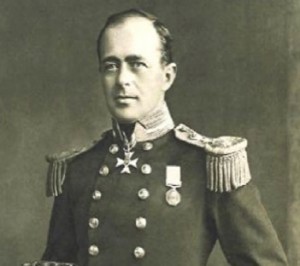 How dare this impertinent foreigner not only invade Scott’s chosen territory (after first saying he was going to the North Pole and then heading south) but get there first! Amundsen had done everything right. Using his enomrmous polar experience honed in the Arctic during his pioneering voyage to be the first to navigate through the fabled North-West Passage, studying Eskimo fur clothing and how they handled their dogs and sledges, he did everything right. Scott, on the other hand – as revealed by Roland Huntford in his controversial book comparing the two men, Scott and Amundsen – was a bad organiser and an indecisive leader, not good attributes for a polar explorer.

On the other hand, he was a dab hand with the pen and his postumous diaries gripped the imaginations of people all around the world. As a kid growing up in Hobart in the late 1940s I remember a ludicrous children’s book titled Like English Gentleman by one J E Hodder-Williams, extolling the virtues of great heroes (like Scott). He quotes Peter Pan, for God’s sake, saying to Wendy and the Lost Boys, ‘To die will be an awfully great adventure’, and Wendy told the pirate Captain Hook, ‘We hope our sons will die like English gentlemen’. As an 11-year-old I remember thinking this was utter bullshit, and that it might have been better if Scott had actually got to the Pole and back without killing himself and all his men. I still think so.

Scott was a man who found it difficult to take advice, perhaps because of his naval backround. The great Norwegian Arctic explorer Fritdjof Nansen (who had loaned Amundsen his ice-strengthened ship Fram) strongly advised Scott to take huskies as his primary transport. Scott did take some dogs, but didn’t make much use of them. Instead he put his faith in ponies and motor driven sledges, both of which failed in the harsh Antarctic environment. As well, Scott believed in the ‘nobility’ of man hauling, as being  preferable to any other way. 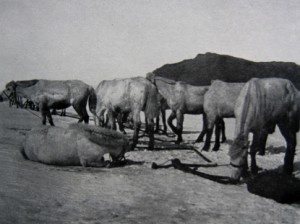 Unhappy ponies on the Antarctic ice 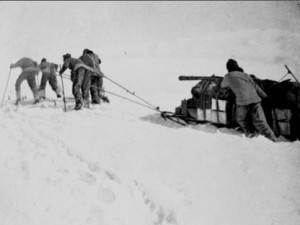 The brutish tyranny of man-hauling to which British polar explorers seemed addicted.

Three of Scott’s decisions virtually assured disaster. First, his ill-considered faith in ponies, despite the proven worth of husky dogs. Secondly, in the laying down of the all-important supply depots for their return journey, Scott was so distressed at the suffering of the ponies that he ordered (against the advice of the pony handler) that the One Ton Depot be left 100 miles short of its planned location. And thirdly, Scott made one of his quixotic on-the-run choices to add an extra man, ‘Birdie’ Bowers for the final dash to the pole. The sledge had been packed with rations and equipment for four men, and this caused enormous complications with camping each night as well as running short of food. Scott had also ordered the returning party to leave their skis behind shortly before they turned back, so poor ‘Birdie’ had to trudge along on foot, the only man without skis.

The Norwegians at the South Pole

Scott (rear centre holding the British flag) and his men at the South Pole. They do not look happy campers.

Amundsen was not completely without fault. Obsessed with making an early start, the spring temperatures were so extreme that he was forced to return to Framheim, his base at the Bay of Whales, after losing several huskies to the extremely low temperatures, and his men suffering from frostbite. But the second attempt went well. The policy of slaughtering an agreed number of huskies as food for men and dogs for the return journey worked well. (Would an Englishman have eaten a dog?)

In fact all the five men in the polar party had actually put on weight when they arrived back at Framheim from the South Pole.

In January 1995 I was on board the Russian icebreaker Kapitan Khlebnikov as a guest lecturer on a tourist voyage to the Ross Sea. Also on board was another lecturer from the Scott Polar Research Institute. I thought it appropriate that I should read a poem to the expeditioners supporting the Roland Huntford position at an evening drinks and recap session on our day’s activities. (The Scott Polar Institute are still rueing the day they let him in to research Robert Falcon Scott.)

I’m not an admirer of R Falcon Scott

Who died with his men in the snow.

This bone-headed sailor had blown his career

And really had no where to go.

Against all advice he’d used ponies not dogs,

Despite what Nansen had told him;

But Scott was a leader who did things his way –

He was, I’m afraid, rather dim.

You can argue – some do – that he might have got back

If Amundsen hadn’t been such a cad.

To pretend to go north and then get there first

Now the British are famous, through cricket and war

(As we are well aware in Australia);

Of claiming the high ground, despite a defeat,

By making a triumph of failure.

Amundsen did it right, and Scott stuffed up,

Made him appear the big winner.

Scott’s defenders may say – and they still do today

IF British morale had been up,

By getting there first and planting the flag

Fat chance, my friends, for this ponderous Pom

As a lad I was dosed with the classic Scott myth

Of the noble explorer so cool.

What cobblers, what bullshit – what a sham it all was