Down Under In The Top End Conversation With Richard Hughes

NO TERN UNSTONED – MUSINGS AT BREAKFAST

In 2003 I received a phone call out of the blue from Peter Thompson, then hosting Radio National’s Breakfast show. Would I be interested in doing a talk every Friday for the program?

Well what recently retired journalist could refuse a gig like that? So for most of 2003 and 2004 I did just that – beefed on about anything I found interesting. Social history, pet hates like loud music in restaurants, the gratuitous violence of footbrawl and thugby (I lead a football free life), beach fishing, management speak, bad poetry, grey nomads, great April Fool scams… and some topics difficult to summarise. 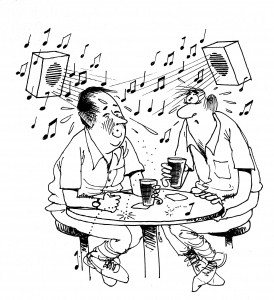 It was all great fun, and the ABC Books decided to publish a book of some of my morning meanderings. To my great delight, a former colleague at the Hobart Mercury many years ago, Geoff Hook, agreed to do some cartoons to illustrate the selected talks.

At precisely this time, ABC Radio decided to dispense with my services on Radio National Breakfast. Peter Thompson, as it happened was moving on, and so it seemed was I. The producers decided I wasn’t the right ‘fit’ for the new presenter. I had no regrets and enjoyed it all while it lasted. I was reminded of something that great media survivor Don Lane said to me in the ABC-TV make up room where we happened to meet when my eight year term as presenter of the viewer feedback program Backchat ended when the ABC decided to ‘let me go’ as they say in the trade, in the early 1990s.

I mentioned to Don I’d been given my marching orders, a circumstance with which he was extremely familiar in his long career, and he said, ‘Yeah Tim that’s how it goes in television. One door closes – and the next slams shut in your face!’

I have to say that eight years isn’t a bad run in television terms, but my return to radio was far shorter.

Anyway I disappeared from the airwaves just as the book of some of my talks came on the market. Finding a title is always a struggle, and I suggested a play on words of that great humourist Ogden Nash, who once said:

‘I am a conscientious man. When throwing stones at seabirds, I leave no tern unstoned.’

Now in all honesty I have to say that my departure from Radio National Breakfast didn’t enhance the sales of the book, which were going quite well, but dropped like the proverbial stone I was metaphorically hurling at terns when I vanished from the airwaves.

Before long – shock horror – I was remaindered. I bought up what copies I could get, and some are still available through this web site.

I thought I would leave a description of my book to my old friend Peter Thompson:

(PETER FOX THE FOLLOWING IN ITALICS NEEDS TO BE DIFFERENTIATED IN SOME CLEVER WAY – INDENTED, DIFFERENT BACKGROUND) FROM MY DIRECT PROSE.)

Foreword to No Tern Unstoned – Musings at Breakfast.

Tim Bowden is a larrikin. I’m a conservationist. I want to alert you to the threat posed to this endangered species. Where are all the larrikins now? 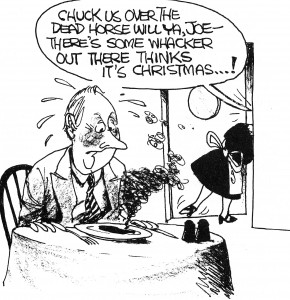 There used to be a serious tradition of it at the ABC. Nowadays larrikinism gets pretty short shrift. Despite the occasional foible, the old aunt has become a serious faced sort of girl. A bit mirthless. A bit on the Presbyterian side, if you know what I mean. Yet, like Canute, Bowden stands against the tide.

Tim turns a good story. That doyen of radio, the now retired Alistair Cooke, once said that the writer must make each sentence full of suspense. That’s what Bowden does. You hang on as you listen. You are finished your journey to work or home, you want to get out of the car but you can’t. He holds you there as his story unfolds. The sting tantalisingly awaits the denouement.

Bowden can’t be blamed for coming from Tasmania. Or for Tasmania being a source of many of his stories. In fact, it was probably the making of him. Tasmania is a land of myth and fable. Its characters are more improbable and its absurdities are more transparent than in any other place I know. It was in Tasmania where I first heard the yarns of a ring of raconteurs. On clear frosty nights we would sit by the licking light of camp fires, a billy of tea on the coals, our faces burning and our bums freezing as we listened. It happens more in Tasmania than anywhere else, I reckon.

You might detect I have an affection for Tasmania too. As a matter of fact, Tim and I both held the position at one time of Talks Officer, Launceston, for the ABC. 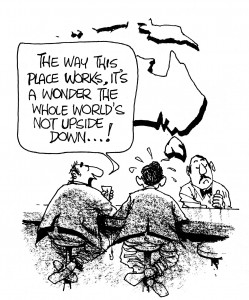 He is the only reporter I know who has even found a Tasmanian angle at the UN. He recalls how as an accredited journalist at the UN headquarters he gained admission to the members’ bar and lounge and there observed a cleverly crafted map of the world made of wooden pieces. Alas, the piece for Tasmania was upside down.

Nor do I mind his passion for Antarctica. After all, it’s a logical extension of Tasmania. If you go as far south as Hobart you may as well go all the way! Besides, when he came back he brought to life the wonders of a place that most of us have only visited in our imaginations. Antarctica suits Tim Bowden because it has all the ingredients of a good story. An heroic age still within living memory. A vast wilderness. Those whose work takes them there still go with a sense of drama and adventure.

You can tell from the way he talks that he has a love for it. And it’s more than just Antarctica or Tasmania. He brings a zest for life to his every story. And if you haven’t yet seen a funny side to something, well, you haven’t yet thought about it the way Tim would.

There’s something too about that Bowden voice. That tone of his when telling a story. Impish. Irreverent. It would have annoyed the hell out of his superiors. Can you imagine what nervous wrecks his school masters would have been? Or ABC managers for that matter? 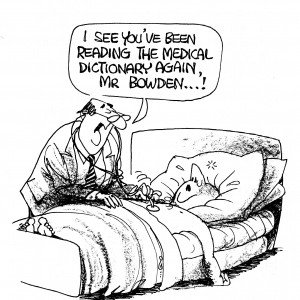 In this age of sound bites lasting a few seconds and attention spans barely more, you might wonder whether there’s a future for short essays of the Bowden sort on the wireless. After all, when broadcast on Radio National Breakfast, these yarns spread over seven minutes or more: a virtual eternity in modern terms! Yet there’s one thing I know for sure. Our listeners want the sort of engagement and involvement he brings. They respond to people like Tim, who has the knack of being like a personal travelling companion, sitting beside them in the front seat as they drive to work.

Bowden has a way of getting beneath the skin of our lives. He hates the noise generated by modern restaurants. Hey, that’s why I go to so few of them anymore. He puzzles at guinea pig ownership. The lack of a warm, responsive relationship with his guinea pig parallels my family experience too. He’s moved to the coast. Isn’t that where we’re all headed? In our dreams, at least.

I think the secret lies in laughter, dear reader. Tim Bowden makes me laugh. Out loud. You can’t ask for better therapy than that.

So, how do these short stories translate from the voice medium of radio to the written word? Very well, I might say. There’s just one thing. When Tim mentions his great broadcast accomplishment of playing a tune by his teeth with a pencil, you’ll just have to imagine it. Like the best things in radio storytelling, you’ll enter a theatre of the mind. 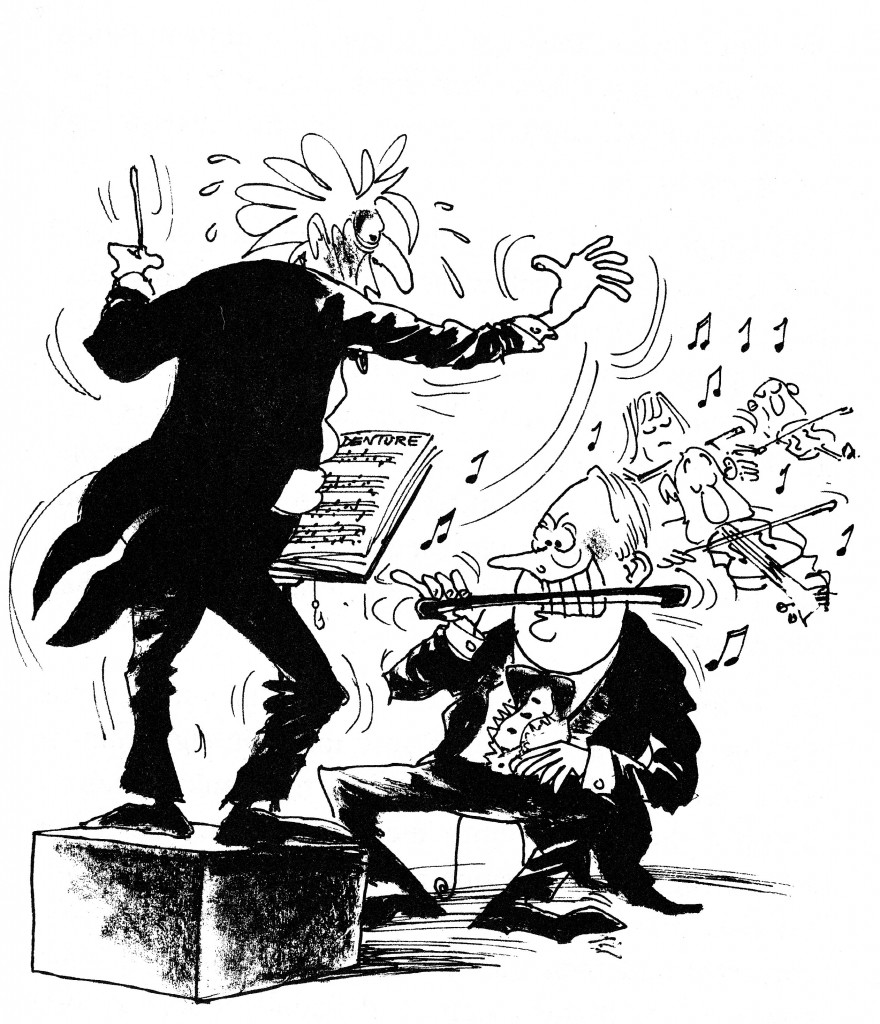 I thank you for that Peter Thompson. I’m too embarrassed to say any more actually. (This book is available from this website at $25.00 including postage. See order details on the right of this page.)