It was known as Outram Road Gaol, and of all the places to be if you were a prisoner of war of the Japanese, this was the worst place of all – a military prison that made Changi look like heaven. But because so relatively few Australians were involved – about 70 or so, not all of whom survived of course – the Outram Road Story has tended to slip through the cracks when set against dramatic events such as the Sandakan Death Marches and the slave labour on the Thai Burma Railway. So it’s time the Outram Road Gaol story was told. 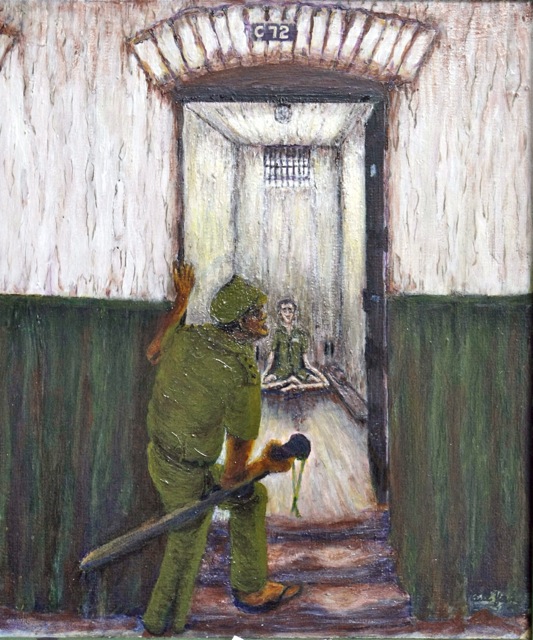 Formerly known as Pearls Hill Prison, Outram Road Gaol was a 19th century institution built for Asians. Condemned by the British in 1918, it was never demolished, and was taken over by the feared Japanese military police, the  Kempeitai, in 1942 to house anyone who had committed a grave offence, be they Japanese soldiers, Asian civilians, European internees or Allied prisoners of war –  men or women. It was a place of punishment and execution, usually by Samurai sword. 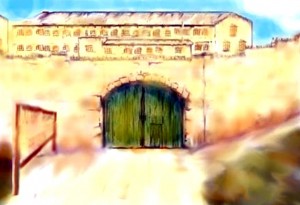 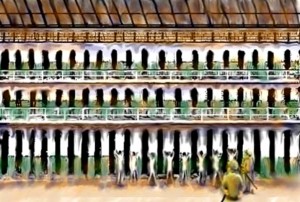 The three-tiered block of tiny cells.

Signaller Chris Australian Signaller Chris Neilson, who had attempted to escape but had not yet been tried by a Japanese court, was quickly made aware of the possible fate that awaited him when he arrived at Outram Road.

Just wooden bedboards, a toilet bucket and you… (Sketch by Don Moore)

All prisoners were held in solitary confinement in tiny concrete cells, with barely enough room to lie stretched out on the two bed boards and wooden pillow provided. A toilet bucket, usually overflowing completed the cell furniture. They were starved and beaten and forbidden to communicate with any other inmates.

For those like Sapper Stan Davis, a would-be escapee from Sandakan in Borneo, the first sight of his fellow prisoners in Outram Road was a huge shock.

AUDIO: The gaol itself, is like any gaol – concrete, cold. But the inmates… I’ll never forget that while I live…

The total isolation in an Outram Road Cell was one of the hardest aspects of imprisonment. Former POW prisoners, Herb Trackson, Chris Neilson and John Wyett.

AUDIO:  In the cells there was two boards about 8 inch boards an inch thick that you used to lay on…

An unshielded light bulb burned all night. During the day the guards wore soft rubber or felt slippers to sneak up and look through the spy holes in the doors to make sure prisoners were obeying the rules, and bashed them if they weren’t. The starvation rations of 6 oz of rice per day and half a cup of watery soup, with half a cup of tea had to be consumed within 30 seconds, or it would be snatched away. The men were not only ravenous, but continually thirsty in the tropical heat. Allowed out into the gaol courtyard once a week for a rudimentary wash, guards watched closely to make sure the dehydrated men didn’t drink any of their washing water.

But it was food that mostly occupied their minds. Lieutenant Rod Wells:

AUDIO: If we were out emptying the latrines, which was a big thrill to be allowed to do that, and if we walked past a hibiscus plant…


The hunger to communicate was ever present. Herb Trackson:

AUDIO:  There was a signaller in the cell next door to me, I think it was Chris Neilson. And he taught me Morse code.


A few inmates could not stand the bestial conditions in Outram Road, and went mad, some hitting their heads against the wall until they died, others refusing food and starving themselves to death. The squalid conditions in the cells did not help. Although a fastidious people themselves, the Japanese never allowed the cells to be cleaned, and they became verminous and foul. Body lice spread throughout the whole gaol, including the Japanese guards themselves. Scabies baths were ordered in the gaol courtyard, but because the cells were still not cleaned, the scabies reinfected everyone. At times, as Rod Wells recalled, the itching became simply unbearable. 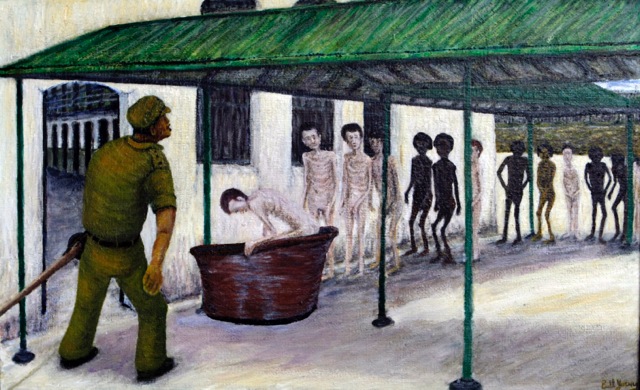 Emaciated prisoners line up in the prison yard for the indignity of the weekly scabies bath. (Painting courtesy Bill Young)

One of the peculiarities of the Japanese Kempeitai system was, that although they were literally starving their prisoners to death, they were supposed to complete their sentences. Dying mucked up the books so to speak, so several stratagems were introduced for bureaucratic convenience. One was to put a doctor in the same cell as a dying man, so that they could say that everything possible had been done. The unfortunate doctor selected was a civilian, Dr James Taylor, who had been the principal medical officer at Sandakan in Borneo. He was in his 90s when I interviewed him in Sydney in 1983.

AUDIO: In Outram Road I think I counted about 1400 deaths. The Japs had a peculiar mentality…

The other stratagem available to the Kempeitai was to wait until it became clear a prisoner was dying, and then put a number of these desperately ill men onto a flat bed truck and literally dump them outside the main gate of Changi prison so their own Australian doctors could do what they could for them. The Kempeitai, of course, didn’t care if they lived or died, but if they survived and were brought back to reasonable health, they had to return to Outram Road to continue their sentences – which had been suspended while they had been in Changi.

Dr Glyn White remembers the occasion when both Signaller Chris Neilson, and Lieutenant Rod Wells arrived at Changi in this manner.

AUDIO: Well, Rod was unrecognisable. And you could count the surface anatomy of every bone he had in his body… 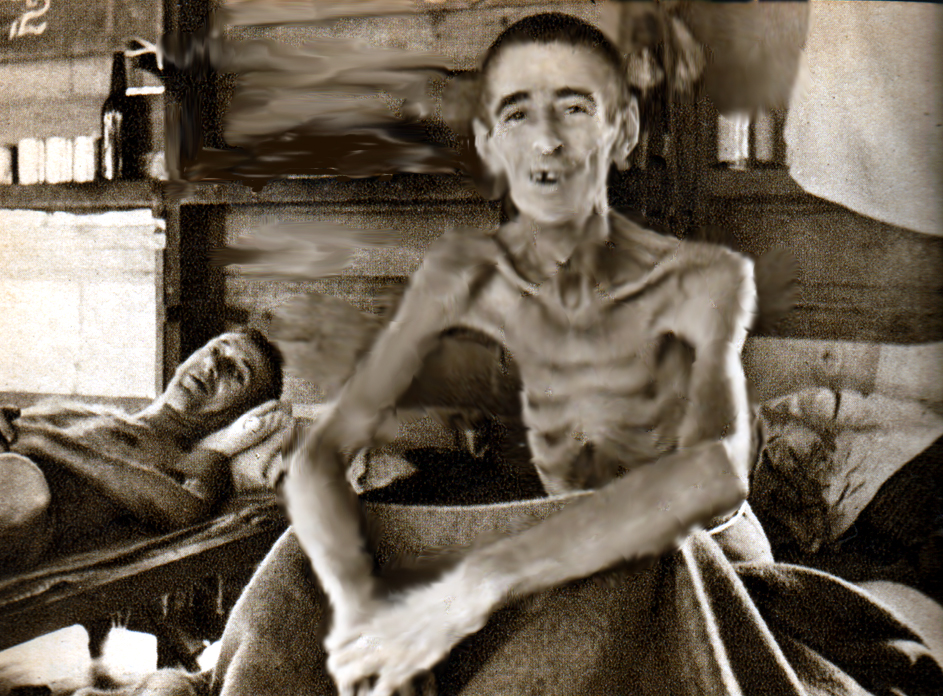 Few photos survive of just how skeletal the Outram Road Gaol survivors were when they got to Changi. This is British POW ‘Becky’ Sharpe, who is grinning because the photo was taken in the Changi Hospital and the war was over. (Photo: Illustrated London News)

The Changi doctors managed to keep Rod Wells in their hospital for the final few months of the war. Chris Neilson was not so lucky, and went back to his cell until the bitter end. But his spirit was unbroken, and remained so. One of his techniques of survival was to take the mickey out of his guards, even if he was beaten up as a result. It helped to relieve the monotony, he told me. On one occasion when he backchatted a big Korean, he overdid it, and the guard stamped on his hands breaking them, and gave him a depressed fracture of the skull with his baton.

So here’s Chris Neilson with the last word on Outram Road Gaol.

AUDIO: I’ve said it before, and I’ll say it again – I’m no bloody hero, just one stubborn bugger, that’s all… 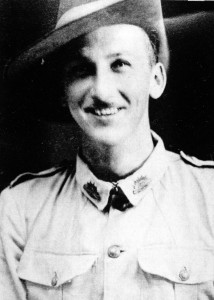 A young Chris Neilson enlisting in the AIF in 1940 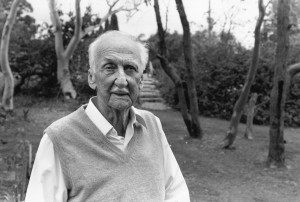 IF YOU HAVE ANY COMMENT TO MAKE ON THIS POST OR ANY OTHER FEATURES ON THIS WEB SITE, PLEASE USE THE CONTACT BUTTON UNDER THE HEADER BAR.

My book on Singapore’s infamous Outram Road Gaol, Stubborn Buggers, is available at a discount price of $47.50 inc postage and handling within Australia.