PART THREE – THE MEETING WITH NAGASE

THE MEETING WITH NAGASE

In 1995, after much soul-searching, Eric and Patti Lomax decided to travel to Thailand to meet Nagase Takashi near the iconic hooped River Kwae Bridge near Kanchanaburi. On Nagase’s suggestion they also planned to accompany him to Japan and visit his home at Kurashiki City, not far from Hiroshima – where Nagase said the cherry blossoms would be in bloom. Lomax felt he was ready to meet his old enemy ‘eagerly and in good heart’.

They booked into a hotel across the river from Kanchanarburi and lunched in the River Kwae Restaurant where they met the proprietor, Tida Loha, a remarkable woman who had generously given Nagase the land on which he built his Buddhist temple of reconciliation. The Nagases and Lomaxes had agreed to meet the following morning on the bridge itself.

As they walked to the rendezvous in the heat of the early morning sun, Lomax saw Nagase first in the distance. He had forgotten how small he was, ‘a tiny man in an elegant straw hat, loose kimono-like jacket and ‘. Lomax thought, from a distance, that he resembled an oriental carving, some benign wizened demon come to life. He was carrying a shapeless blue shoulder bag. Eric Lomax described their meeting in his memoir The Railway Man:

He began a formal bow, his face working and agitated, the small figure barely reaching my shoulder. I stepped forward, took his hand and said in Japanese, ‘Good morning Mr Nagase how are you’?

He looked up at me – he was trembling, in tears, saying over and over, ‘I am very, very sorry…’ I somehow took command, led him out of the terrible heat to a bench in the shade. I was comforting him, for he was really overcome. At that moment my capacity for reserve and self-control helped me to help him, murmuring reassurances as we set down. It was as though I was protecting him from the force of the emotions shaking his frail seeming body. I think I said something like, ‘That’s very kind of you to say so’, to his repeated expressions of sorrow.

He said to me, ‘Fifty years is a long time, but for me it is a time of suffering. I never forgot you, I remember your face, especially your eyes.’ He looked deep into my eyes when he said this. His own face still looked like the one I remembered, rather fine featured, with dark and slightly hidden eyes – his wide mouth was still noticeable beneath cheeks that had sunken inwards.

I told him that I could remember his daily last words to me. He asked what they were and laughed when I said, ‘Keep your chin up’.

He asked if he could touch my hand. My former interrogator held my arm, which was so much larger than his, stroking it quite unselfconsciously. I didn’t find it embarrassing. He gripped my wrist with both his hands and told me that when I was being tortured – he used the word – he measured my pulse. I remembered he had written this in his memoir. Yet now that we were face-to-face, his grief seemed far more acute than mine. ‘I was a member of the Imperial Japanese Army, we treated your countrymen very very badly.’ ‘We both survived’, I said encouragingly, really believing it now.

A little later, I’m sure he said – ‘For what purpose were you born in this world? I think I can die safely now.’ 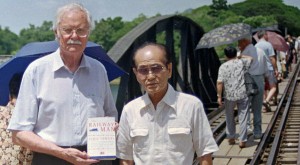 Eric Lomax and Nagase Takashi meet for the first time since the war on the Kwae River Bridge in Thailand. Lomax is holding a copy of his memoir The Railway Man (Photo: The Telegraph)

The two men began to relax in each other’s company, talking easily, although Lomax could not recall later exactly what had been said. By then they had introduced their wives, who immediately found a common language of sympathy and understanding.

They talked a lot about the railway, the utter futility of it astounded both of them. Most of the track was torn up after the war, and only the first hundred kilometres is still in existence, a railway track to nowhere. As they talked Lomax was struck by the fact that he and Nagase could have got on well had they met under different circumstances. Both had a lot in common, books, teaching and an interest in history.

Lomax still realised that he had consider the matter of forgiveness, as it means to much to Nagase. It was surely worth salvaging as much as they could from the damage done to their lives. But how to do this. Lomax realised that it would have to be done carefully, with some formality. He decided to wait till they got to Japan to find the right moment.

Later they flew to Osaka, where they were met by Michiko and Nagase, and some of Michiko’s pupils, and travelled on the remarkable bullet train from Osaka to Okayama. Lomax thought it was like riding a missile on rails. At Kurashiki, which had remarkably survived almost untouched by war, they were entertained at the Nagase’s house, and taken on tourist trips to significant sites, including Hiroshima. All this time Lomax realised that he had not had even one flash of the anger he had harboured against Nagase for all those post-war years. 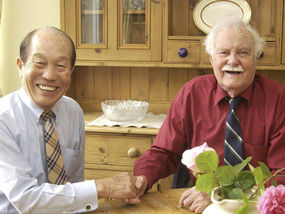 This remarkable photograph shows a meeting between Osamu Komai , son of Captain Matsuo Komai (who tortuned Eric Lomax and his fellow POWs in Thailand in 1943) at Lomax’s home in Berwick, England. Komai came to apologise for what his father had done. (Photo: Daily Express)

But the moment of formal forgiveness had still not occurred. Lomax thought it might have occurred when they visited the old Imperial capital of Kyoto, but no occasion seemed appropriate. Finally, with time running out, the two couples were staying in a Tokyo hotel before the Lomaxes flew back to Britain. Lomax suddenly asked the women if he could see Nagase on his own. He wrote in his memoir:

There, in that quiet room, with the faint noise of trains of the city streets rising up to this, I gave Nagase the forgiveness he desired.

I read my short prepared letter out to him, stopping and checking that he understood each paragraph. I felt he deserved this careful formality. In the letter I said that the war had been over for almost fifty years, that I had suffered much, and that I knew that although he too had suffered throughout this time, he had been most courageous and brave in arguing against militarism and working for reconciliation. I told him that while I could not forget what happened in Kanchanaburi 1943, I assured him of my total forgiveness.

He was overcome with emotion again, and we spent some time in his room talking quietly and without haste.

Before the Lomaxes left Thailand, they visited the Chungkai War Cemetery. As they both looked at the myriad graves there, Lomax murmured to Patti, ‘Sometime the hating has to stop.’ 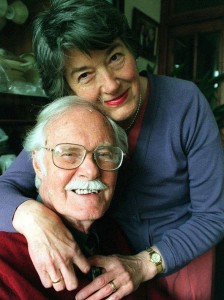