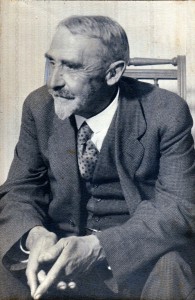 Frank Prosser Bowden, Manager for Telegraphs at the Hobart Post Office in 1912. I never saw a photograph of my grandfather (who died before I was born) in anything but a three-piece suit, whether gardening or even fishing. He may have been born in one!

In previous blogs, Scott the Clot, and Amundsen Centenary Celebrations 1,  I mentioned the Bowden family’s brush with Antarctic fame – that 100 years ago this year, my grandfather, Frank Bowden, was Manager for Telegraphs at the Hobart Post Office when the little Norwegian ship Fram unexpectedly appeared in the Derwent on 7 March 1912. In the days when the geographical explorers were the world’s superstars, this was a huge story. Everyone knew of the race to the South Pole between the Englishman Robert Falcon Scott and the Norwegian Roald Amundsen, and that the race was probably won. But by whom? Secrecy and security was paramount, and Roald Amundsen left Fram moored incommunicado out in the Derwent estuary, while he went to the Hobart post office to send telegrams to King Haakon of Norway, Fritdjof Nansen (Amundsen’s mentor who also owned Fram) and his brother Leon all in the capital Christiana – later renamed Oslo. My grandfather also transmitted a later longer telegram detailing the expedition’s triumph, to the London Daily Chronicle breaking the news to the world, but for several days my grandfather was the only other person on the planet other than Fram’s crew to know that.

When Norwegian Havard Tommeras read about this on the internet, he contacted me and came to Hobart to follow the Amundsen trail there, and I flew down to meet him. He had discovered that there were some Amundsen relatives in Tasmania, and also that prints and glass plates developed for Amundsen while in Hobart by the local photographer J W Beattie were still in existence, despite the Beattie studio in the city of Hobart being destroyed by fire in 1933. Havard also planned to fly to the South Pole himself to join the centenary celebrations there, and put up a replica tent of the one Amundsen had left at the pole, that he had made at his own expense, at the South Pole one hundred years on.

But only just! When Havard got to Santiago en route to Antarctica, the bag with the tent had gone AWOL. Happily it was located by the airline, and to his great relief he recovered it in Punta Arenas two days later just in time to go with him to the Pole. Actually being at the South Pole is very rare. The Americans, who run the Scott Amundsen base actually at the pole, do not encourage visitors as they get sick and tired of having to rescue sometimes ill-equipped private adventurers trying to reach it. But in this case, with a big private air lift organised by an American company, Adventure Network International, would have helped. In any case the fact that the Norwegian Prime Minister Jens Stoltenberg was going in for the anniversary was clearly a plus. Good weather is also a bonus in such circumstances and Havard and his fellow travellers had three perfect days at the South Pole.

There were some other tents as well – a replica of Scott’s tent, and a twin for Havard’s specially-made tent.

Cheekily, before leaving Norway, Havard had inveigled his way through the Prime Minister’s security cordon and told Stoltenberg that he was going to the South Pole too, and he hoped to photograph him in front of his replica tent.

At the Pole, the Prime Minister unveiled an ice sculpture of Amundsen, and Havard saw his chance.

I recognized the voice of Stoltenberg. He was going away from the tent in the direction of the South Pole Station where he stayed. In a split second decision I started running in his direction. This time I didn’t stop for his security guard but ran straight to him. And I didn’t do any small talk. Just reminded him about our meeting in Oslo and my wish to get a picture of him in front of the tent. And he and one of his crew joined me back to the tent and I got the picture. 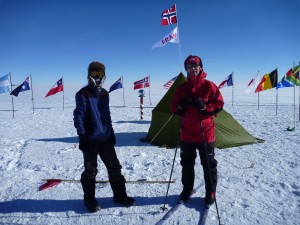 Havard Tommason (left) well masked against the cold, with the Norwegian Prime Minister, Jens Stoltenberg, in front of the facsimile tent, Polheim, that Amundsen left to mark the South Pole 100 years before.

The duplication of the famous picture taken of four (one had to take the picture) men and the tent, Polheim, at the South Pole in 1911) was harder to organise, but Havard did it. 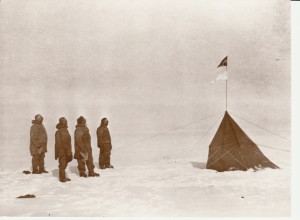 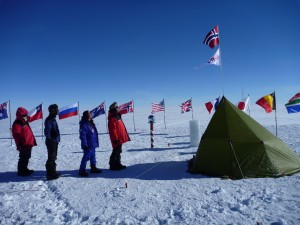 Recreation of Polheim by Havard and friends at the South Pole December 2011.

On the mimicking of the Polheim photo of 1911 is Florian from Germany in the front. Second is Peter from Hong Kong (an astronaut-teacher!), me and in the back is Jan – also from Norway. It was just him and me from Norway on the flights.

Havard is an accountant by profession. I told him he should have been a journalist! He is also making a video of his adventures in Hobart and at the Pole, and I hope to get a copy one day. 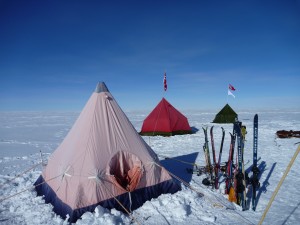 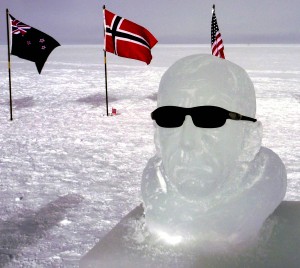 A splendid ice sculpture of Raold Amundsen carved at the South Pole complete with sunnies.

Meanwhile on March 11 I was in Hobart to share in the centenary celebrations of Amundsen’s arrival there on 7 March (a Sunday was more convenient for those who wanted to see the fun). Amundsen (played by a good friend of mine Rod Ledingham himself an Antarctic veteran) was to journey to the Post Office steps by sledge drawn by huskies, which is not how he actually did it in 1912 of course, but what the hell.  The sledge was on wheels and the huskies ran with their owners to keep them on track. Poor Rod nearly passed out from heatstroke because he was dressed in genuine Inuit furs (loaned by the Tasmanian Museum) on a warm Hobart autumn day.

The Premier of Tasmania, Lara Giddings, whom I have met in past years, greeted me on the Post Office steps with a kiss on the cheek. It is the first time I have ever been kissed by a State Premier! Alas, this was not recorded for posterity. 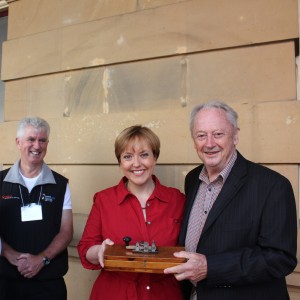 (Centre) The Premier of Tasmania, Lara Giddings, inspecting the morse key mounted on a sound box for the occasion. Left: Daryl Peebles, from the Amundsen Centenary and Huskies Picnic Organising Committee 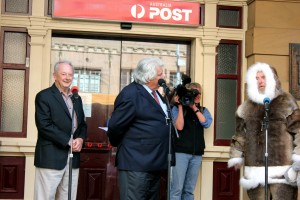 Daryl Peebles, one of the organising committee, had thoughtfully mounted a Morse key on a little wooden ‘sound’ box enabling me to send Amundsen’s telegrams quite quickly and for the crowd to hear. Unfortunately no one had told him to give them to me on paper, but verbally was good enough. They were quite short anyway, rather along the lines of ‘Achieved South Pole, all well’. The Norwegian Ambassador to Australia, Siren Gjerme Eriksen, was also present, and the ambassador unveiled a plaque for the Post Office which will mark the sending of the historic telegrams from Hobart.

The huskies, the sledge and Amundsen headed off to Hobart’s St Davids Park followed by hordes of delighted children, their parents and other interested bystanders. 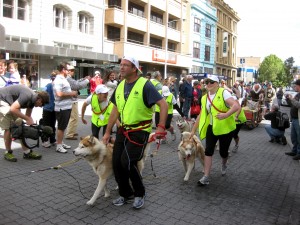 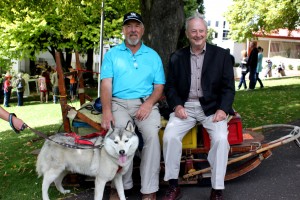 Roald Amundsen (Rod Ledingham) left cools down from the Inuit fur suit pictured at the Huskies Picnic in St David’s park with me and canine friend.