After hearing about the curative powers of Moree’s hot mineral spas, Tim and Ros Bowden decided to the plunge themselves. 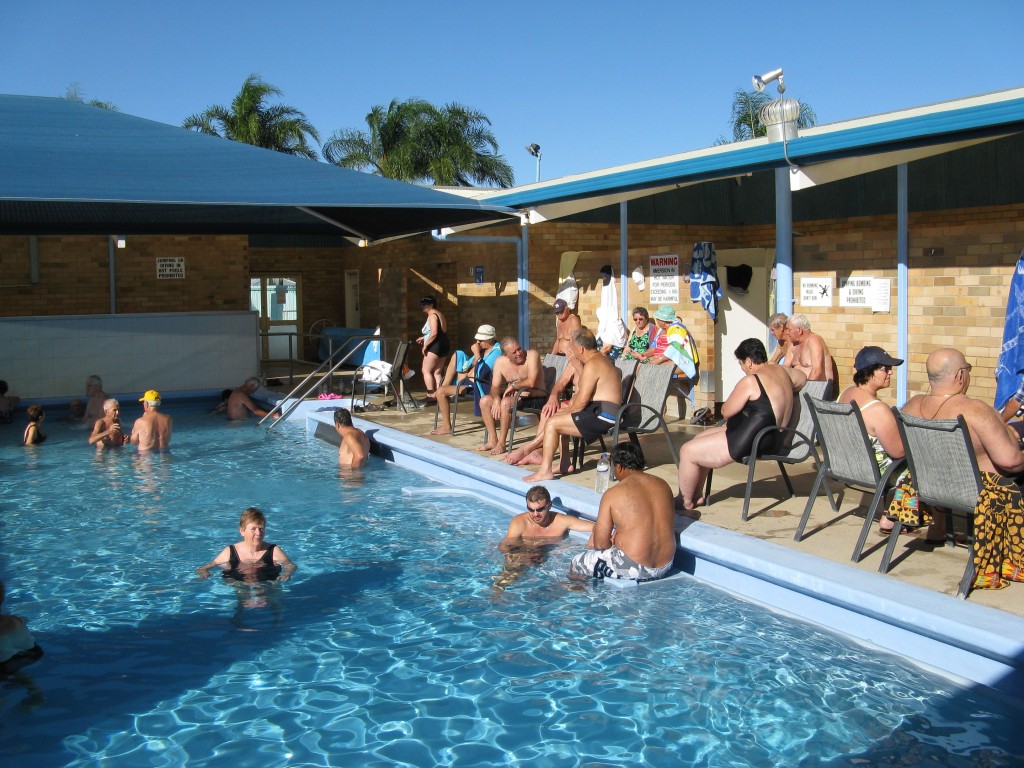 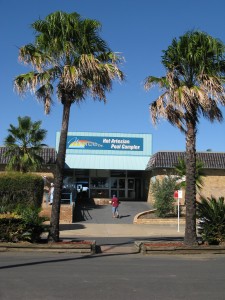 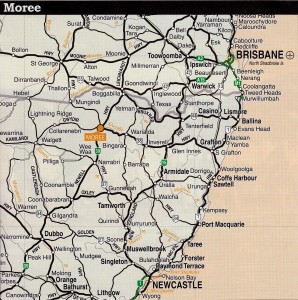 Think of Moree and you will probably associate this northern New South Wales rural centre with wheat, cattle and cotton – in other words it’s as Australian as billy tea.

But when you head into Moree’s smart open-air hot artesian spa pools for a therapeutic dip, you will be lucky to hear English spoken, let alone with an Aussie accent.

This is a surprisingly cosmopolitan establishment. Clustered around (and in) the two spa pools in the early morning, steam rising from the mineral-rich water, you can hear animated conversations in Serbian, Russian, Greek, Italian, Portugese. Polish, Hungarian, German, Ukrainian and other European languages. 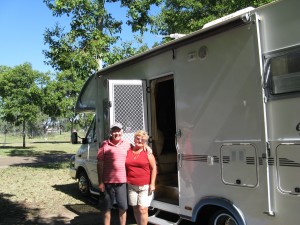 Helga and Viktor Rupprecht about to take the waters near their brand new Euro Villa Sunliner.

Helga and Viktor Rupprecht (camped next to us in a Moree caravan park) came to Australia from Austria in 1969, and have been grey nomads for the last seven years in their luxurious motor home – spending six months of every year on the road.

Twice a year they spend a couple of weeks ‘taking the waters’ at the Moree Hot Artesian Complex in company with fellow long-term migrants to Australia who make the pilgrimage to Moree from Sydney, Melbourne and even further afield.

‘I come for the relaxing hot waters which keep you young for ever’, joked Viktor (71), while Helga (68) is not expecting a Lourdes-style miracle cure. ‘Sometimes I think it is good for your joints, and the aches and pains go away after a couple of days. I’m not sure there is any benefit for the long run.’

When my wife Ros and I ‘took the waters’ ourselves, we found that it was – as Helga said – the experience of the hot baths that people liked mostly. There are two pools, one at 38º C, and the second closer to 40º degrees, surrounded by changing cubicles. One of the lifeguards told us that some of the older people sometimes fainted if they stayed in too long and then climbed out of the hotter pool too quickly.

‘When the cold air hits them they fall flat on their faces. Sometimes they damage themselves a bit, but we haven’t lost anyone yet! It is something to be careful about though.’

One woman talked to Ros about her arthritis, and showed her the scars from operations on her shoulders and back. The operations worked for a while, but then she developed arthritis. ‘At least I feel good while I’m in the pool!’

Even hotter water jets from three spouts at the shallow end of each spa pool, and people use them to massage their necks, shoulders and back. One football player was treating his back in this way. Another local, a thick-set young man whose job involved ‘heavy lifting’ was clinging to the side of the baths and exercising his aching knees under water.

At the back of the thermal pools is a full length Olympic-sized pool, with shoals of local youngsters swimming Sunday races and time trials in cooler water. 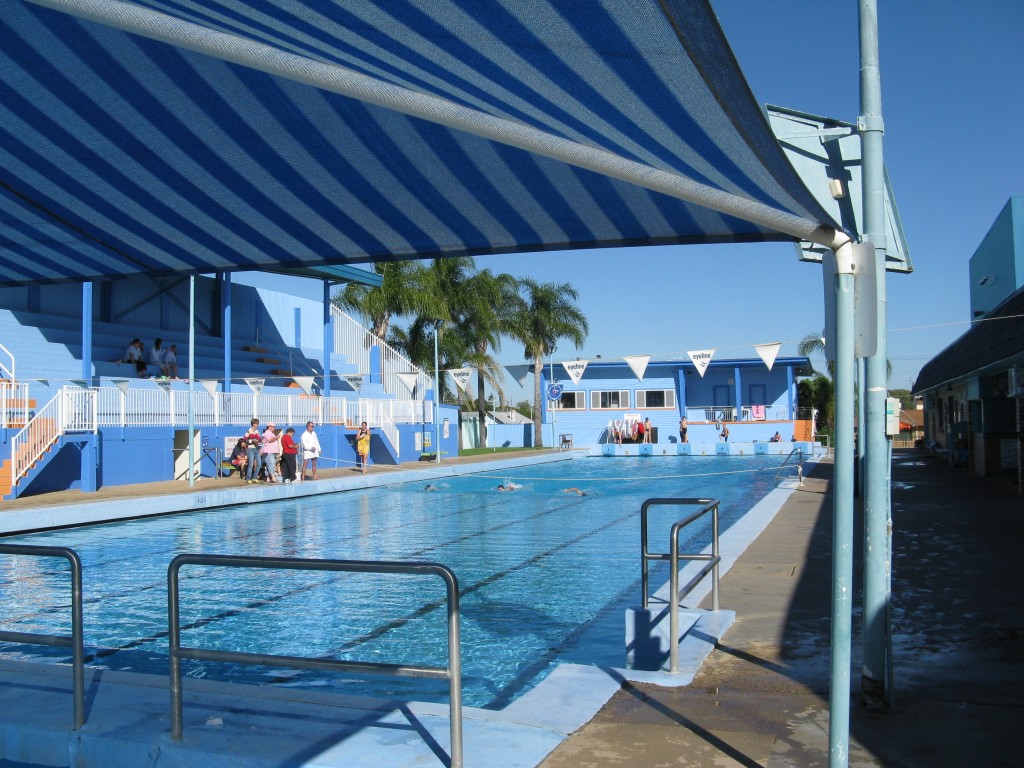 Local primary schoolers in the cooler Oympic Pool, behind the hot spas

The original bore was drilled in 1895. Vast quantities of hot water suddenly spewed out from the Great Artesian Basin – nearly three million litres – flooding nearby shops across the road and the newly built Victoria Hotel, which still stands today. The curative potential of the heavily mineralised water was quickly realised, and a rough pool constructed on the site with railway sleepers so that locals could start ‘taking the waters’.

The baths opened to the public as a commercial concern in 1898, with an entry fee of three pence, and by 1913 two pools were built – one for ladies and one for gents.

In 1965 the baths were in the national news when the now famous Freedom Rides (led by the late Aboriginal activist Charles Perkins and the present Chief Justice of New South Wales Jim Spiegelman) came to Moree in February 1965. Their bus was rammed and run off the road by a local grazier’s son after a spirited public meeting at Walgett (where Aboriginal ex-servicemen were only allowed inside the town’s RSL Club on Anzac Day) but fortunately none of the thirty ‘riders’ were injured. 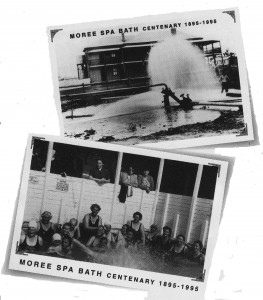 The visit to Moree was more peaceful where the protesters focussed on the segregation of Aboriginal people then in place at the baths. The Freedom Riders decided to protest in front of the Council Chambers, take Aboriginal children to the pool and to hold a public meeting in the evening. From that moment on, Aboriginal children were admitted to the swimming complex.

The smart new building and spa pools Ros and I enjoyed in 2009 are supplied with two new bores drilled in 1999. Curiously enough, although only a few metres apart, one bore is two degrees hotter than the other. Remarkably, the Great Artesian Basin replaces ALL the water in the two pools every six to ten minutes.

There may have been no Lourdes-style miracle cures at the Moree hot baths over the last century but the mineral rich waters are claimed to rejuvenate the skin, ease joint pains, help with sciatica and nerve problems, common skin complaints and the list goes on. It’s hard to say whether the medical benefits or just the sheer joy of being there makes it such a continuing attraction for locals and cosmopolitan visitors alike.