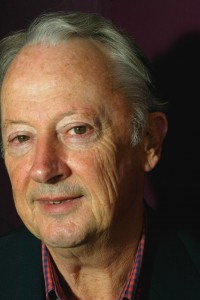 Hi, over a relatively long life in journalism, radio, and television I’ve been lucky enough to travel widely and had some fantastic experiences. Some are still happening…

In this website I’d like to share some of them, and showcase some of the books and articles that have been generated along the way. Journalists are generally rated in the public mind on the same level as used car salesmen, lawyers, politicians or other professionals of dubious reputation. But I’ve always been a happy traveller in journalism which – providing your liver holds out in that traditionally hard-drinking profession – gets you into all kinds of situations that you otherwise would have had a snowflakes chance in hell of experiencing. And talking of snowflakes, that includes Antarctica, as well as stints in Vietnam during the Indo China war, working in London for the BBC, and in Asia and North America for the ABC.

I’ve also travelled widely in Australia as a not-so-grey nomad, and now a fully fledged one, in our 4WD Penelope towing our trusty camper, and have written four books on these travels. Like Clancy, there are times when ‘we don’t know where he are’. Well, for some weeks anyway. Outback camping is addictive.

An index of recent and past blogs can be accessed in the Blog Archives in the top navigation menu. 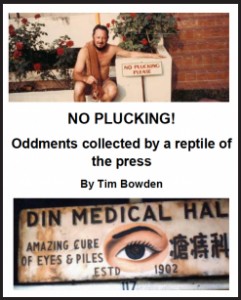 NO PLUCKING! – Oddments collected by a reptile of the press

Ever since I was a small boy, I have collected published information that has amused me. This continued when I became a cub reporter on the Hobart Mercury in 1955 (which makes me quite old) I have hoarded clippings and odd and unusual sayings or unfortunate headlines. Some are old and yellowed with age. 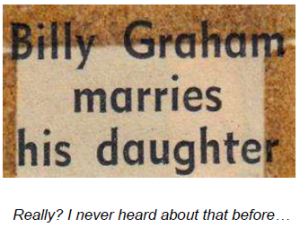 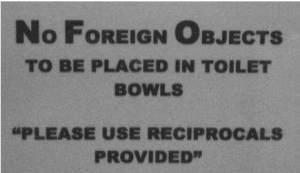 Unexpected spellings (Australia is not immune) have been photographed in loos. My sister-in-law Fran snapped this gem in the supposedly upmarket Adels Grove in Queensland’s Gulf country.

Direct translations from Chinese into English can be hazardous. This one was supposed to alert gentlemen to a toilet for the disabled.

NO PLUCKING! Is by no means an autobiography, but I have drawn on my varied experiences as a newspaper journalist, and current affairs reporter and foreign correspondent for the ABC in North America and Asia in the 1960s, as well as hosting the ABC’s viewer reaction program BackChat for nine years from 1986. 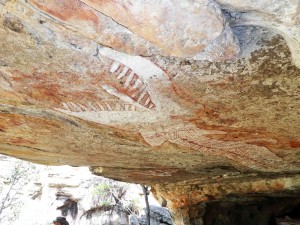 This stunning image of the Rainbow Serpent painted under a rock overhang near Mr Borradaile in Arnhem Land is thought to be the largest ever discovered in northern Australia. For me it was the precursor to three days of joyous discoveries with Davidsons Arnhemland Safaris in July 2018.

I have been fascinated by the ancient Aboriginal rock paintings ever since I first visited the Kimberley and Cape York Peninsula. But a three day visit to the Mt Borradaile region of eastern Arnhem Land literally took my breath away. A full account can be accessed through the TIM’S BLOGS link on this website.

COMMENTS ON ANY OF THE MATERIAL ON THIS BLOG ARE WELCOME. PLEASE USE THE CONTACT BUTTON UNDER THE HEADER BAR