On the way to Carnarvon Gorge in the Central Queensland Sandstone Belt, Tim and Ros Bowden* stopped off to explore Mount Moffatt

As the black cockatoo flies, there is only about 40 kilometres between the Mt Moffatt section of the park and Carnarvon Gorge, but you have to drive a 310 kilometres loop to get there, on a mix of dirt and bitumen roads. We liked the idea of heading for Mt Moffatt first, for some isolated and old fashioned camping. Or so we hoped. It’s getting harder and harder to make a fire and cook a camp oven roast dinner because of restrictions various. 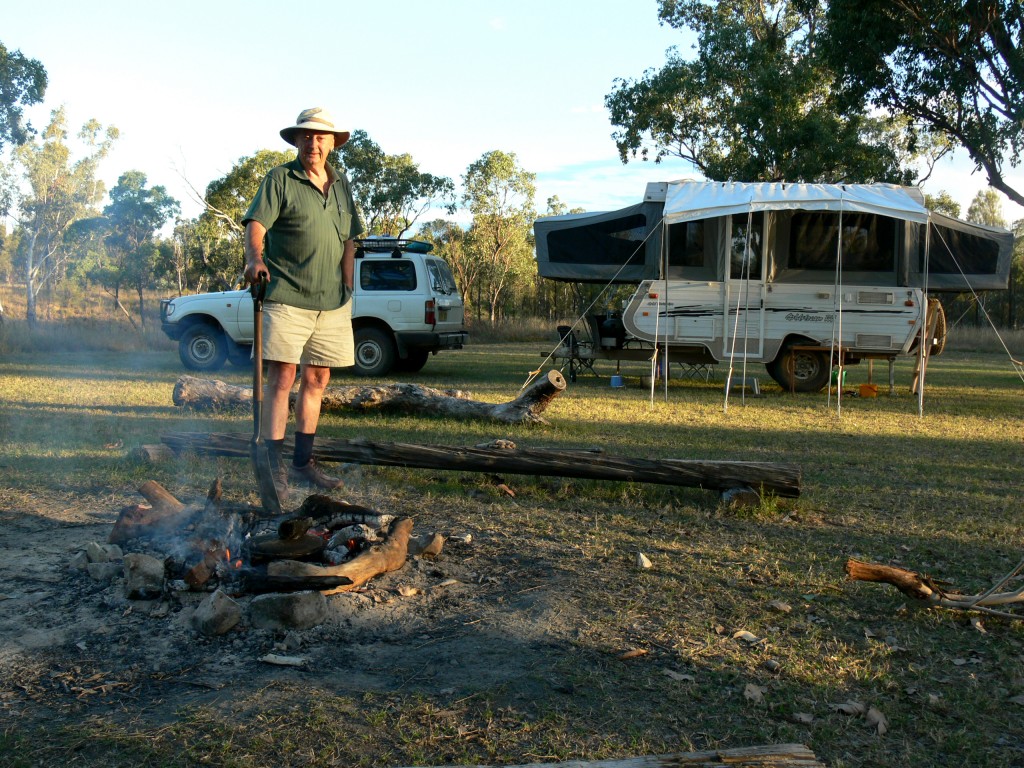 We live on the Mid North Coast of New South Wales (people often say to us, ‘But why would you want to go anywhere else’?) and started grinding up the Great Dividing Range via the Thunderbolts Way in our trusty Series 80 Landcruiser ‘Penelope’ and a recently acquired Goldstream Sovereign off-road camper so luxurious by our standards it was immediately dubbed ‘The Palace’. OK we are not alone with silly names for grey nomadding vehicles.

We turned off the Pacific Highway at Nabiac, and up to Krambach and Gloucester – by which stage the coastal showers began to leave us, and by the time we reached the high plateau country and Nowenduc and Walcha, we were in sunshine and under a blue sky lightly flecked with small clouds, which is a great way to begin a two-week camping holiday. It was mid April, and we had heard Carnarvon National Park had recent rain, but it stayed fine for us throughout.

Once over the range (which had us back to first gear) we cruised comfortably at 100 kph over the undulating and lush green high country, crossing the New England Highway at Uralla and on through Bundarra and Bingara – through pretty country with little pointy hills, sclerophyll woodlands and Calitris trees – to Warialda on the Gwyder Highway and west to Moree where we camped for the night. For our second day’s run we turned north on the appropriately named Carnarvon Highway to Mungindi on the Queensland border, St George and a lesser (but good) sealed highway directly to Mitchell – where we topped up with fuel and filled an extra 20 litre jerry-can as we would not get any more diesel until we left Mt Moffatt five days later. We camped at Mitchell to stock up with provisions as we would be away from shops for the next ten days. 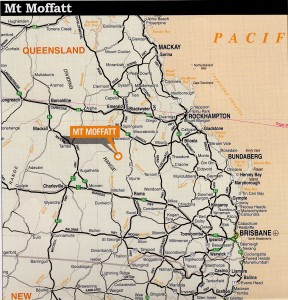 Mitchell to Mt Moffatt is 220 kilometres, the first 120 on single strip bitumen. Easter rains had chopped up the dirt badly, but hey, what’s the point of having a 4WD and off road camper if you can’t take that in your stride. We drove through cattle properties bursting with green grass and fat stock. In fact the Mt Moffatt run only became a national park as late as 1979. The explorer Thomas Mitchell was the first European to the area in 1846, and one year later Edmund Kennedy passed through on his way to find the notional ‘inland sea’. Mitchell wrote favourably of the country he had seen, and settlers were not long behind him from 1859 on with their cattle.

We saw well-preserved post-and-rail cattle yards near the Ranger’s Residence (the old station homestead) as we called in to register on our chosen camp site, = Dargonelly Rock Hole. I noticed Penelope’s altimeter had us at 700 metres. Later we would climb to 1100 metres with some four-wheel-driving for fabulous 360 degree vistas, the Mahogany Forest and the modest beginnings of Carnarvon Creek.

There are four camping grounds at Mt Moffatt, the prosaically named Rotary Shelter Shed in the high country to the north, West Branch in the centre of the park, and Top Moffatt to the east. Dargonelly was a good choice for us, with mown grass, shade from well-established gum trees, a long-drop dunny, plenty of potable bore water and – hurrah hurrah – a ground-level fireplace for our camp oven roasts. We made an instant decision to settle ourselves there for four nights, and do day trips around the park.

Our fridge and stove run on LPG gas, so with an auxiliary battery in Penelope and in-built deep storage battery in The Palace, we can be independent of mains power almost indefinitely without solar panels – provided there is a modicum of running about to top up the auxilliary.

Another brilliant autumn day had us strapping on our walking boots and driving back towards the entrance of the park where a two-hour circular walk takes in some intriguing natural features – The Looking Glass (a hole weathered through a high sandstone pinnacle), The Chimneys (intriguingly shaped sandstone pillars) and Cathedral Rock (a sandstone bluff with its grey walls covered in rectangular stress fractures). 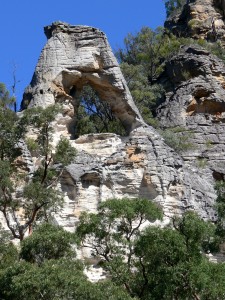 The Looking Glass near Dargonelly Camp 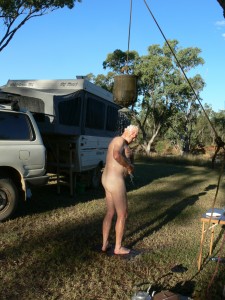 We were fascinated by The Tombs rock art site, where under the shade of a sombre outcrop, natural fissures were used as burial chambers by Aboriginal people. 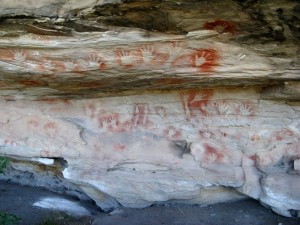 Skeletons were once wrapped in bark cylinders and placed in rock crevices. Sadly over the years visitors took away the remains, leaving no evidence of the mortuary culture. Stencils of hands and paintings of animals are remarkably well preserved, and we sat on benches on the protective board-walk silently absorbing the sombre ambience still pervading this ancient burial site.

That night I cooked the greatest camp oven roast of all time (oh yeah?), a rolled shoulder of lamb and roast veggies, and we sat outside under blazing stars savouring our evening meal, washed down with a few warming reds, beside our camp fire. We had the camp ground absolutely to ourselves. I think such moments are why we do this kind of thing! 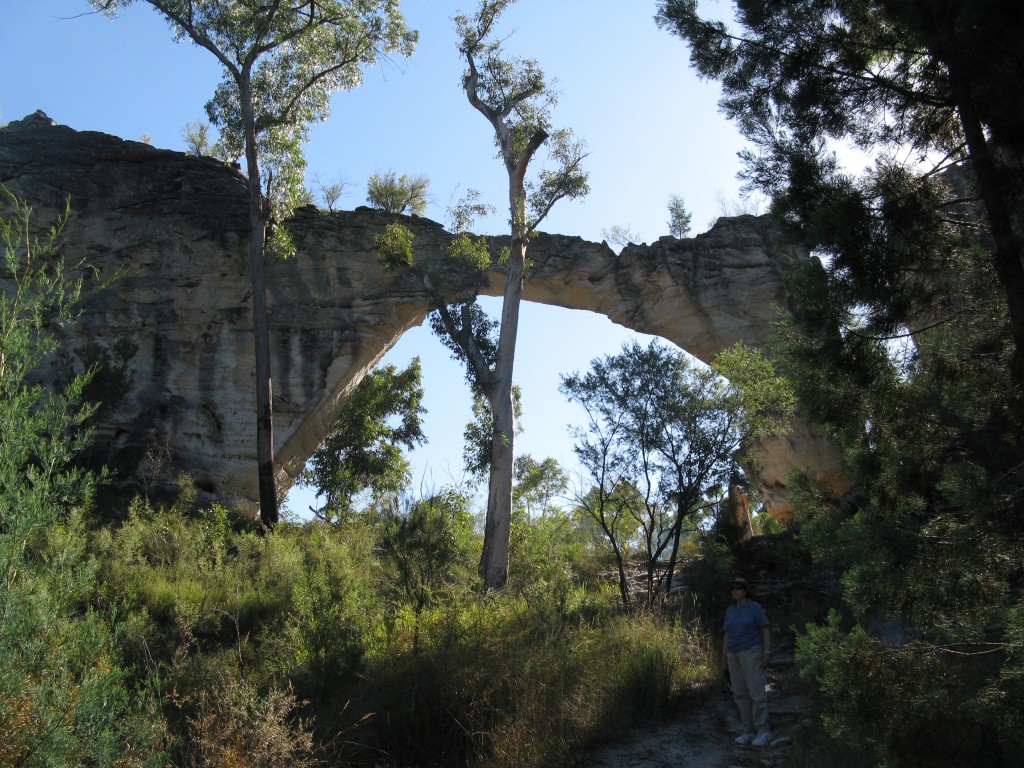 Most of the park roads are two-wheel-drive except to the high country to the north and east of the park. On our way to the Mahogany Forest at 1100 metres, we stopped by the Marlong Arch, a natural sandstone feature, and then engaged four-wheel-drive for the climb up to the highest campsite in the park, the Rotary Shelter Shed. We THINK we could have pulled The Palace up there, but by this time were rusted on to the delights of our Dargonelly camp. Then another climb to the Top Shelter Shed for all-round views of the mountains around us, and a great, but chilly, lunch stop. 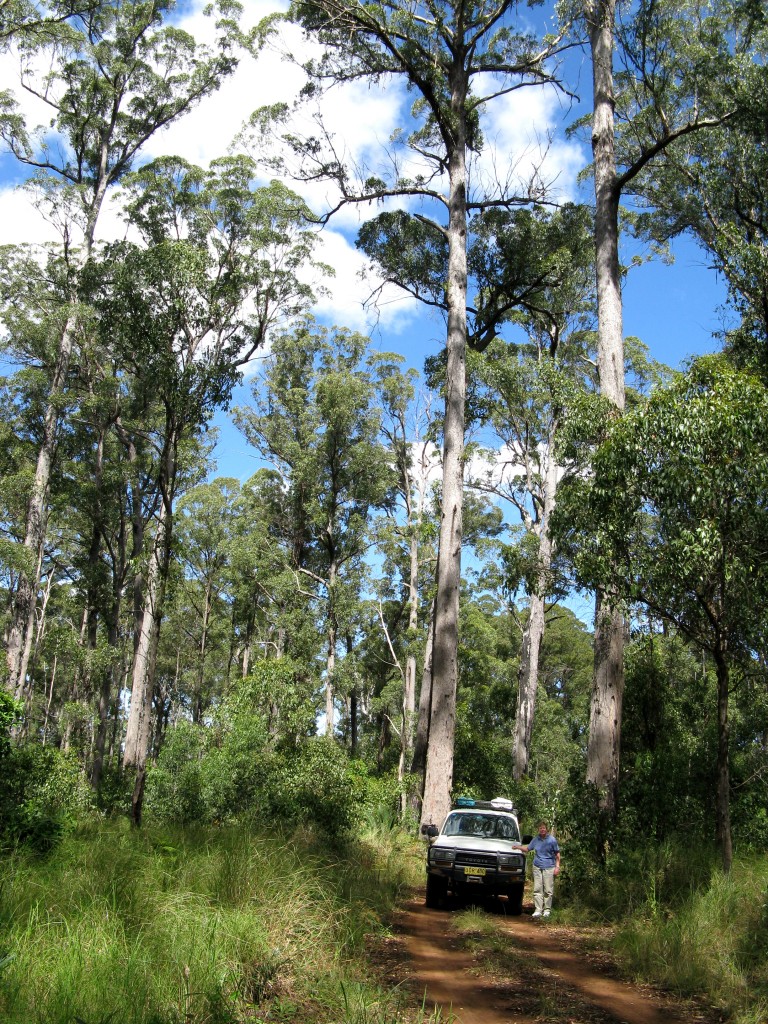 Mahogany Forest in the high country at Mt Moffatt

As we entered the cathedral-like Mahogany Forest, the track bordered by stately stringy-barks, Ros saw a flash of red in the foliage of some Macrozamia cycads, which are from an ancient species that were around in dinosaur times. Their fruit bursts out of a large pineapple-shaped pod, and is bright red. The ripe fruit is poisonous to humans, but the Aborigines found a way to cook and eat it. The seeds need to pass through the gizzard of an animal to propagate and the emu is big enough to do the job. Ros found and photographed an emu scat with the egg-sized seeds exposed.

Later we drove to Top Moffatt camp site on a designated four-wheel drive track, but we had no trouble in two-wheel drive mode, doing a detour into the most central camp site, West Branch, on the way.

Although the Mt Moffatt section of the Carnarvon National Park would be buzzing at peak times like Easter, we only met four other campers in our time there, so it’s great place to enjoy some solitude. We weren’t going to miss Carnarvon Gorge though, and getting there was half the fun! But that’s another story.

*Tim and Ros Bowden will continue their Carnarvon National Park adventures in their next article for Caravan+RV.