Part 2 of the Bowdens exploration of Queensland’s Carnarvon National Park.

Previously Tim and Ros Bowden explored the Mt Moffatt section of Carnarvon National Park, in the wild and spectacular Central Queensland Sandstone Belt, before tackling the much-visited Carnarvon Gorge, which although only about 40 kilometres from Mt Moffatt as the black cockatoo flies, means driving a loop of 310 kilometres to get there. 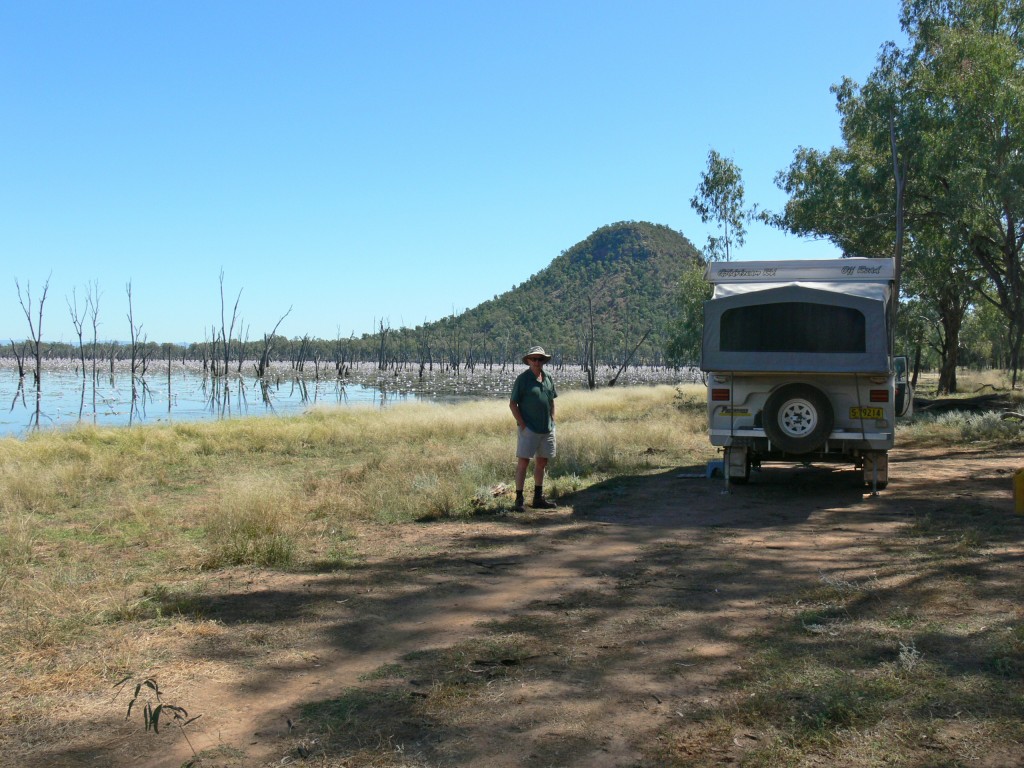 With time in hand, we decided to spend a couple of nights camping out on our way to Carnarvon Gorge, driving our venerable Series 80 diesel Landcruiser (Penelope) and our new off-road Goldstream Sovereign camper (The Palace).

The 85 kilometres of rain-damaged – but dry – dirt pavement seemed easier to drive on the way out, often the case when you know what to expect. Our run of brilliant autumn weather continued as we reached the bitumen, pumped up our tyres with our handy engine-mounted compressor, and headed for Injun on the junction with the Carnarvon Highway where we knew there was a general store.

Well there was and there wasn’t. On arrival we learned it had closed the previous day for three months for re-building. We did manage to get a loaf of bread, two avocados and a few bananas from the servo, and pressed on. At least there was fuel available.

On a whim we took a detour up into Arcadia Valley because it sounded attractive. Dropping down the range, we happened upon a sign to a camping ground at the small but perfectly formed Lonesome National Park. There were only two camp sites, and we had them all to ourselves with the late afternoon sun illuminating distant sandstone escarpments. We sat outside listening to Beethoven’s Choral Fantasy courtesy of our iPod and battery-powered speakers, with a distinctly Australian obbligato of insane kookaburra laughter. 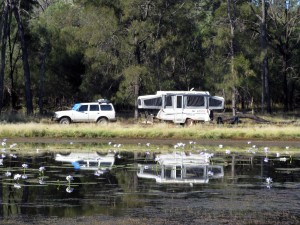 Next morning after an intentionally late and leisurely start we drove further into Arcadia Valley, a well-grassed open area studded with fat cattle grazing contentedly on our way to Lake Nuga Nuga National Park over a mix of single strip bitumen and good dirt. With only 70 kilometres to travel we were there in time for lunch beside the still waters of the lake, studded with water lilies and teeming with bird life. We quickly spotted a pair of circling sea eagles, and closer at hand, cranes, shags, ducks and a lone stately pelican. The extensive national park bird list revealed a twitchers’ paradise.

We camped within a few metres of the water, close to the steep flanks of the conical Mt Warrinilla. Dragonflies like miniature Tiger Moth biplanes dashed about presumably feeding on small insects.

Because of the dead trees giving sanctuary to roosting water birds, we thought it must be a man-made lake, but not so. It was formed naturally very recently. Originally mapped by surveyor Vernon Brown in 1865 it was then noted as low swampy land. When the explorer Ludwig Leichhardt came through in 1884 there was still no lake, which was formed not long afterwards when local flash floods deposited silty banks which acted as a natural dam wall. We sat, drinks in hand, watching the sunset, the low light making sculptures of the dead trees against the orange western sky.

Next morning Ros heard a noise like horses shuffling about and looked out to see hundreds of white cranes roosting in our bay, but the little movement and her whisper to alert me inside the camper caused them all to take off with a sudden whooshing sound. Their getaway was so speedy I did not see any of them! Certainly our most spectacular campsite so far. 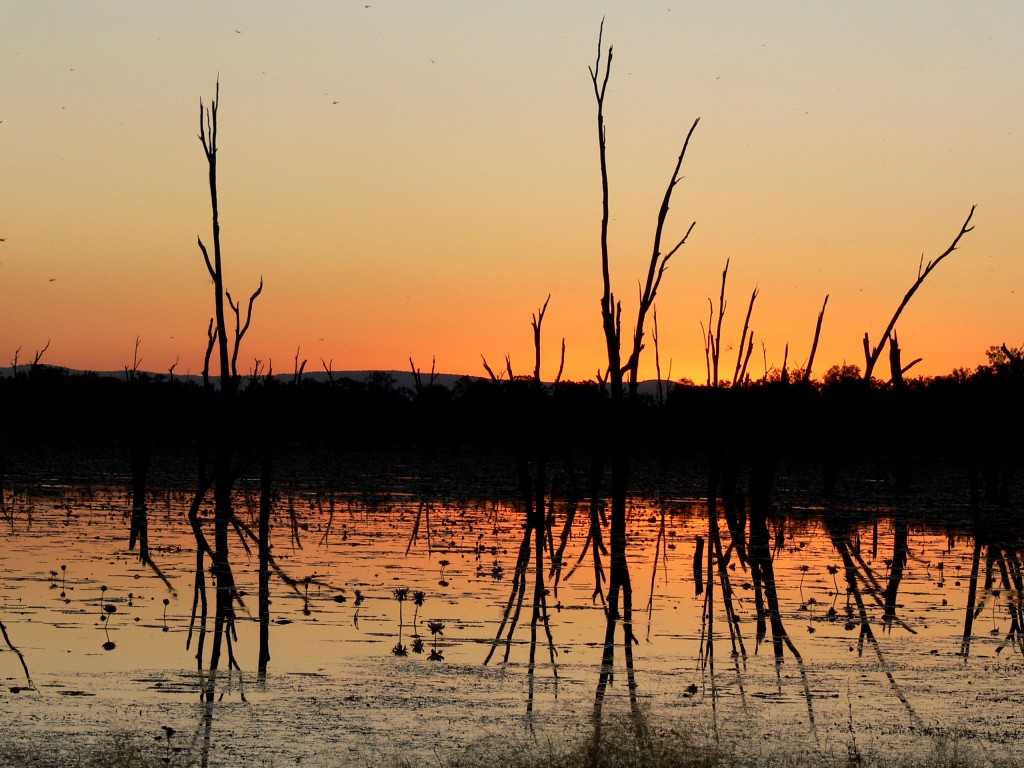 We drove back to the Carnarvon Highway, and turned west towards the Gorge. There are 26 kilometres of unsealed road which does not deter those motor home and caravanners who are usually paranoid about a speck of dust on their pristine rigs. Some 70 000 or so visitors visit Carnarvon Gorge every year, and with good reason. 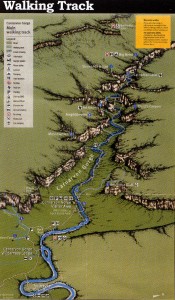 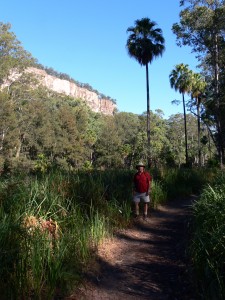 Tim on the well-formed track

Quaintly the national park administration does not allow camping in their own camping ground except in Queensland school holidays, which does not seem a tranquil prospect. Campers stay at the well-run Takarakka Bush Resort, four kilometres from the entrance to the gorge, and there is the Carnarvon George Wilderness Lodge for non-campers, only three kilometres away.

We managed to secure an un-powered site at Takarakka near a screen of trees, and began planning our assault on the Carnarvon Gorge over the next three days. Both the Wilderness Lodge and Takarakka offer guided walks, but the interpretive material and basic maps on offer were good and we rather like doing our own thing.

Basically you drive to the park entrance and walk in, and it is theoretically possible to explore the entire gorge complex (with side excursions to Aboriginal art galleries, caves and other natural features) by walking the 22 kilometre round trip in one day, carrying water and energy food in a day pack. That sounded a bit ambitious for us, and we took advice from a couple in a caravan nearby who had done the big walk but concluded that the 14 kilometre round trip took in most of the big ticket items without the pain of all that extra walking. 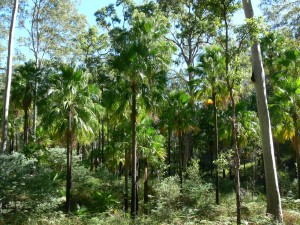 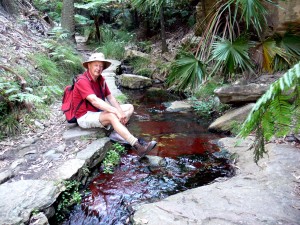 Tim puts his right foot in (not shown: Tim doing the hokey coky).

The benign autumn weather continued sunny and warm, and we picked out way over Carnarvon Creek on stepping stones, thoughtfully laid down by the rangers – the first of many such crossings. This spring-fed waterway never dries up, even during extended droughts and two recent years of good rain events had the ferns, cabbage palms, Carnarvon fan palms and Macrozamia cycads.

The main track is well graded and wide enough to take quad bikes, sometimes used in emergencies to take out injured walkers.

The recommended course of action is to walk as far in as you plan to go, and then do side excursions on the way back. As we passed the turnoff to the Moss Garden (scheduled for our next day’s walk) another walker, his eyes shining, approached us. ‘You wouldn’t believe this, but I have just seen a platypus swimming in the creek as close as I am to you.’ We followed his directions, but it had moved on. 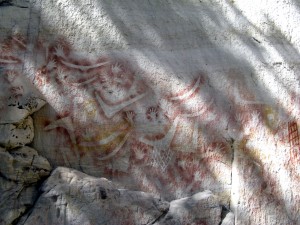 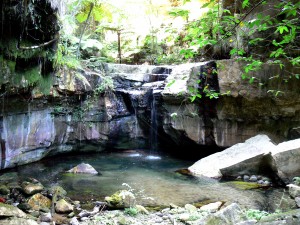 Ferns, Liverworts and other plants take advantage of the shade of the Moss Garden

Criss-crossing the creek on the now familiar stepping stones, we admired the soaring sunlit sandstone walls of the gorge gradually narrowing as we walked further in, and made such good time we were at the turnoff to the Art Gallery a creditable hour and a quarter since starting out on the well-made track. Because of the permanent water, Aboriginal people lived in the gorge for thousands of years. The Art Gallery is not only spectacularly situated under a steep sandstone cliff with well-preserved hand stencils, images of boomerangs, stone axes and other symbols, but has women’s fertility symbols carved into the sandstone.

These are rarely seen in New South Wales rock art galleries, although we did see some at nearby Mt Moffatt. The viewer is left in no doubt what these carvings represent. 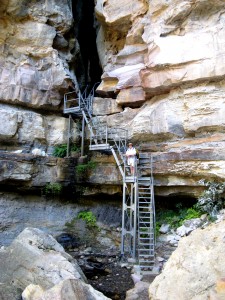 Steps lead up to the Amphitheatre, a huge chamber gouged out by flood waters.

Across the creek again was the track up to Wards Canyon, which has a fascinating history. Its cool, shady and wet environment has preserved a rare stand of five metre tall King Ferns, which have no woody tissue and are actually structured by water held in their fronds under pressure. In the early 1900s it was the seasonal home of the Ward brothers who trapped possums and used the canyon like nature’s refrigerator to preserve their skins killed and processed well before the official season opened so they could make a killing on the market. Its permanent creek has vivid orange and green algae on water-covered rocks the like of which I have seen nowhere else.

Retracing our steps we climbed up steel ladders to the Amphitheatre accessed through a vertical crack in the cliff face which leads in to a vast chamber gauged out by flood waters over the millennia, but open to the sky – one of Carnarvon Gorge’s most dramatic features. 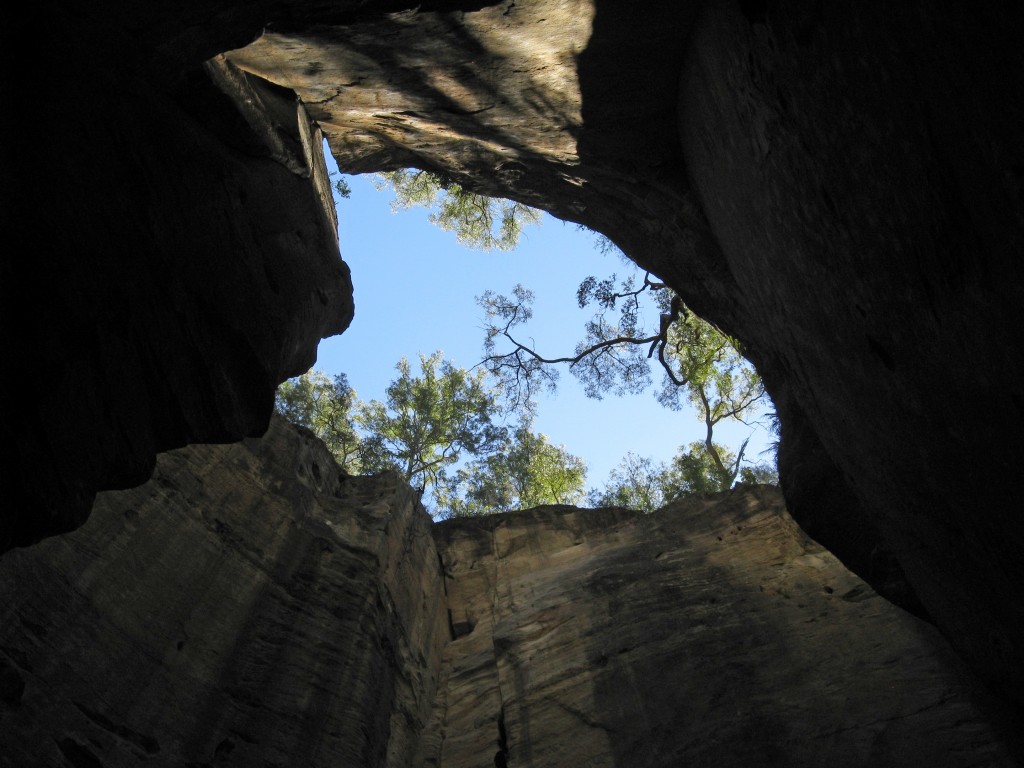 Looking skywards inside the Ampitheatre

The next day we had a shorter walk up the gorge to see the Moss Garden, another permanently shaded mini-gorge with a rich carpet of moss, ferns and liverworts. This lesser walk gave us time to swim at the Rock Pool, just outside the park, in Carnarvon Creek, the only place where swimming is allowed. Nearby are some of the shorter excursions to Mickey Creek Gorge and the Baloon Cave Aboriginal heritage walk. We left the climb to Boolimba Bluff, which gives an overview of the gorge, to the more adventurous.

Despite the large visitor numbers, Carnarvon Gorge is big enough to not make you feel crowded, and if you are lucky with timing, you can marvel at the vast scale of natural sculptures like the Amphitheatre on your own.

Queensland’s superb Central Sandstone Belt, with its array of national parks large and small is well worth exploring.