Island people consider themselves special – for better or worse, that’s how it is. Even at my advanced age, approaching the north coast of Tasmania in the Melbourne-Devonport ferry, Spirit of Tasmania, still give me the surge of excitement that returning Taswegians get when they catch the first glimpse of their homeland – as my old friend, novelist Christopher Koch put it, ‘causes a leap of the heart, like the sudden appearance of a loved face’. 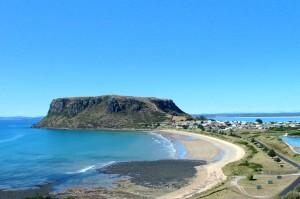 In my youth and early working life as a journalist I travelled widely in Tasmania, bushwalking and covering stories for ABC radio and television (and earlier as a reporter for the Hobart Mercury) but I had never travelled in my native island as a tourist. I wanted to do a Penelope book on Tasmania, but as I was planning to write an autobiography (Spooling Through – An Irreverent Memoir) I was nervous about using personal experiences that might double up with Spooling Through – which was eventually published first in 2004.

That cleared the decks, really, for Penelope and The Manor, Ros and me, to voyage to Tasmania to explore my home state for the first time as a visitor. I was able to visit places not seen for thirty or more years, like Cradle Mountain which I first saw in 1948 when, as a ten-year-old my parents and some of their friends rather bravely took me through the Lake St Clair-Cradle Mountain Reserve, an 80 kilometre six-day trek.

But it was an experience that stayed with me, and triggered a great love of walking in the Tasmanian bush, even though I nearly died in 1956 when, with two companions, we took a short cut when walking out of Lake Pedder (then still in its pristine state) into the Arve Valley near Geeveston. We missed the track, but unwisely kept going, and three days later emerged cold and starving from the tangled rainforest maze filled with horizontal scrub – which fills up the valleys like a malevolent barbed wire without the spikes – and were very lucky to get out of an area where otherv bushwalkers have perished. 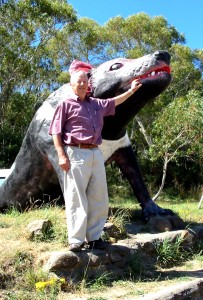 Tim gets up close and personal with a Tasmanian icon.

The two vehicular ferries, the Spirits of Tasmania (SPOT 1 & 2) had just started their nightly Melbourne to Devonport return voyages when we booked Penelope, our Series 80 Landcruiser, and The Manor, our much travelled Jayco Flight camper for a day voyage, only available in high season. I figured that early autumn is a good time to travel almost anywhere, but particularly in Tasmania where its notoriously fickle weather steadies down a bit.

We drove along the North-East Coast from Devonport through Burnie to Stanley near the famous Circular Head, camping there to see the heritage homestead of Highfield House, built in 1832 and once the home of the the manager of Woolnorth, Edward Curr, a huge property that occupied most of the north-east tip of Tasmania. This was actually established by Royal Charter which made it (in Curr’s view) not subject to the control of Tasmania’s then Governor, George Arthur, much to Arthur’s fury. This heritage residence is beautifully restored, and well worth a visit.

Early next morning I climbed to the top of The Nut (no one calls it Circular Head), a fantastic feature, a volcanic plug with steep cliffs all around, and a flat undulating grass-covered top. It has great views over the surrounding coast, including Highfield House and the wharf area of Stanley. There is a chair lift but it wasn’t running at 8 am, but it is not a hard nut to crack, and thereby lies a tale. In 1892 when they wanted some rock fill for a new breakwater, they drilled 5000 lb of gunpowder into the sheer dolerite rock face conveniently near where they needed the rock, and let it off. There was a spectacular explosion, but absolutely nothing happened – until 12 years later when 200 000 tons of rock unexpectedly came crashing down! Fortunately no one was killed. 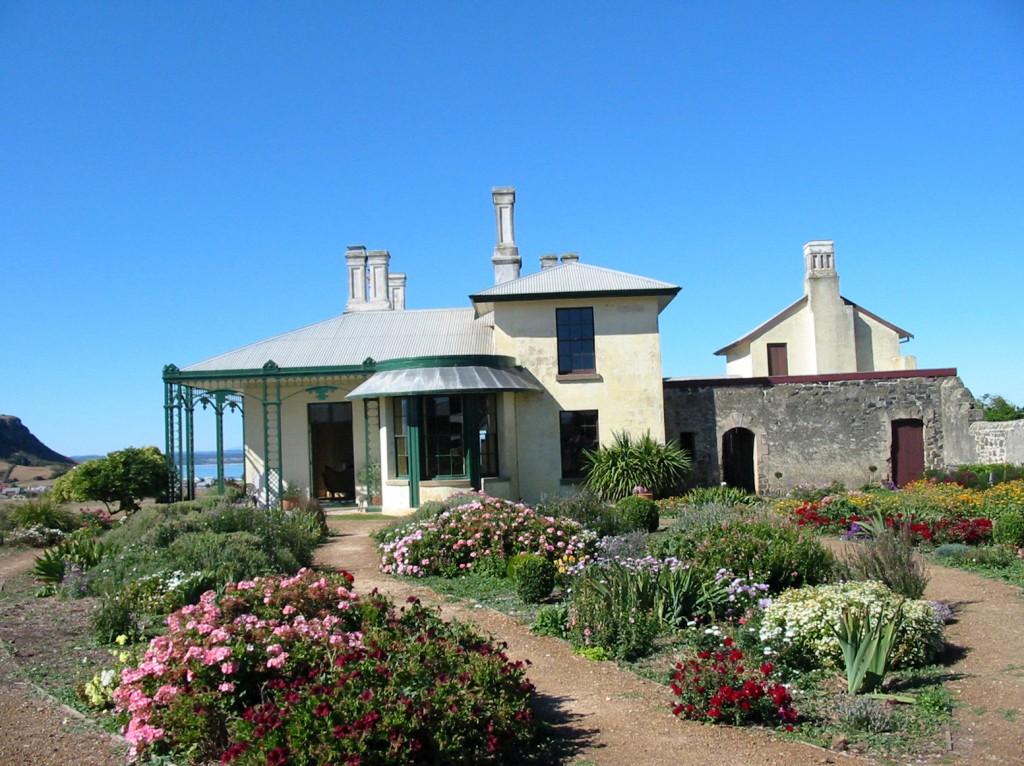 Sheltering under The Nut’ is Highfield House, home of the manager of the Van Diemen’s Land Company at Stanley, how a heritage property.

We also booked a tour of the Woolnorth homestead, first occupied as early as 1826 and has some of the oldest continually occupied buildings in Tasmania. Its wild coastline was also the scene of a dreadful massacre of Aboriginal people in 1828 at the aptly named Cape Grim after four shepherds were alleged to have been murdered. 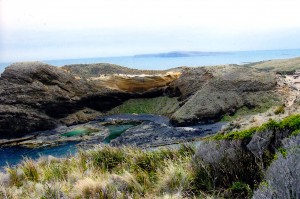 The well-named Cape Grim where a massacre of Aborigines took place in 1838. 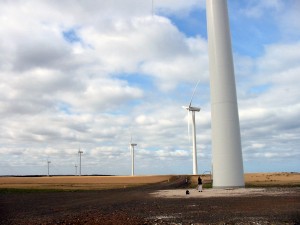 A more modern development has been the use of Woolnorth land for an extensive wind farm (included in the tour) with tall towers and great white blades spinning productively through the continuously windy climate.

From Marawah (the northernmost town on the West Coast) we turned south to the Arthur River where planned to meet Brian Mansell, then manager of the Tasmanian Aboriginal Land Council in Hobart. With my new-found enthusiasm for Aboriginal rock art seen on a recent trip to the Kimberley, I was aware that the Tasmanian Aborigines had some sites on the West Coast, and when I contacted Brian Mansell I didn’t expect a personal tour, but that is what we got when he drove from Hobart to meet us. 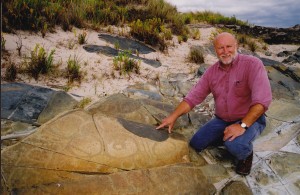 Brian Mansell shows us the ancient petroglyphs etched into rocks at Sundown Point. 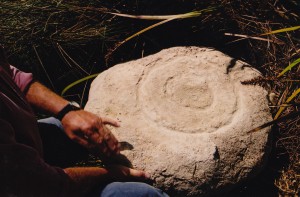 This engraved slab of sandstone was washed up on the beach at Preminghana, south of Marawah, in 2002.

Getting to know Brian was one of the highlights of our Tasmanian wanderings as well as seeing the rock engravings at a site called Sundown Point and later at Preminghana, further north, near Mt Cameron West near the town of Marrawah. Although rising sea levels have obliterated some of the petroglyphs previously photographed in the early 20th century, Brian was able to show us one remarkable example of concentric circles engraved on a slab of sandstone that had been washed up on the beach at Preminghana in 2002!

The person who found it had contacted Brian, then stayed with the stone in case it was stolen. Brian has since hidden the stone at Preminghana and asked us to wait on the beach while he fetched it.

I had a personal interest in the next leg of our journey which was over a controversial road through the Tarkine wilderness. This construction was bitterly opposed by environmentalists, and forced through by the then Lennon Labor Government during 1995 and 1996. My youngest brother Philip, whose company had won the tender for the job, built it. He handled the situation with great diplomacy, sometimes giving protesters lifts out of the work area (but not into it!) and after the road was finished, his company won a national environmental award for sensitive construction in a wilderness area. 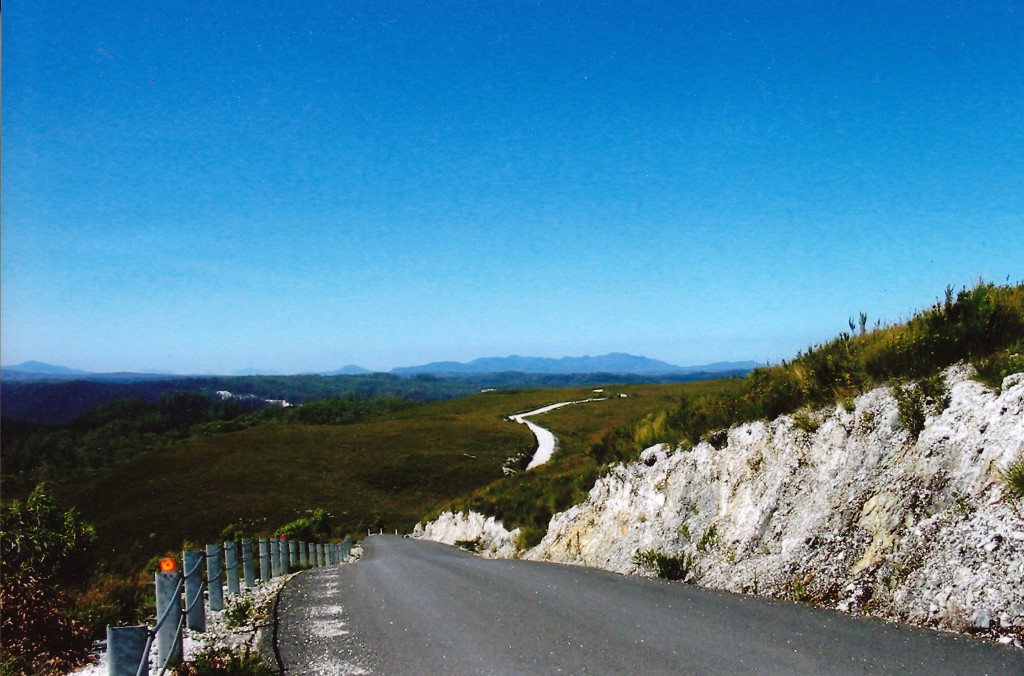 Approaching the controversial road built through the Tarkine Wilderness in 1995-6 by my yougest brother Philip – who incidentally won a national Autralian award for environmentally sensitive construction.

The road was unsealed, but the steeper grades had a single bitumen strip. On the southern end the road descends steeply through hairpin bends down to the Savage River. I misjudged how steep it was, and was caught in second gear, when I should have been in first. I wasn’t game to shift a cog in case I lost control, and could smell our brake pads smoking and the brakes themselves fading as we JUST managed to get down safely with the added weight of our camper behind us. I had beads of sweat on my upper lip and cared not confess to my wife Ros how hairy the drive had been.

The West Coast has always fascinated me, with its wild terrain, heavy rainfall and history of gold and copper mining as well as harvesting the incomparable Huon Pine. This wood was ideal for boat building, being completely impervious to the Teredo worm, the bane of wooden ships from time immemorial.

Huon Pine was first logged by the unfortunate ‘hard case’ conficts. They were set to Sarah Island in Macquarie Harbour in 1822 to isolate them from the east coast of Tasmania, where the large and secure penitentiary at Port Arthur had not yet been built. With convicts outnumbering free settlers in those days, the authorities saw a convict led insurrection as a distinct possibility.

Ros and I took a wonderful boat journey up the Gordon River, from Strahan, with its incomparable reflections. This included a tour of Sarah Island where many convict ruins remain, including great logs of Huon Pine used for the slipway to launch boats built by the convicts – still with sweet, fragrant smelling wood still only a few millimetres below its seemingly rotting surface. 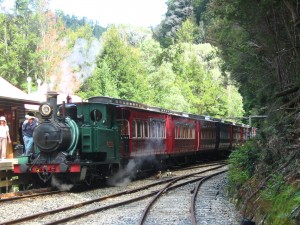 The 19th century steam train gets ready to engage the Abt cogs to haul its carriages up the steep grades over the King River Gorge. 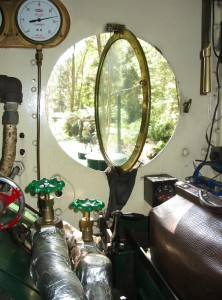 I got to ride in the cabin!

In recent times the historic Abt Railway has been rebuilt, using the original steam engines that used an ingenious system of cogs in the middle of the track to haul the ore from the Mt Lyell Company’s mines over an otherwise impossibly steep gradients from Queenstown to reach ships waiting in Macquarie Harbour. It is surely now one of the great railway journeys of the world. I got to ride in the engine-driver’s cab too, as we engaged the Abt system. It was a bit nail-biting on this trip, as the little engine was ailing, and only JUST made it to the top of the hill.

It was enchanting to re-discover my home state – with its cool temperate climate and rich, sometimes dark history – now emerging as one of the premier gourmet destinations, using much of Tasmania’s home-grown or fish-farmed produce of which Macquarie Harbour has some of the biggest and best. In the 1950s you were lucky to find a restaurant that was able to offer anything other than grilled steak or chops, mashed potatoes and two (overcooked) servings of vegetables. No more. 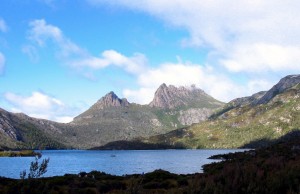 A burst of sunlight on Cradle Mountain with Dove Lake in the foreground. 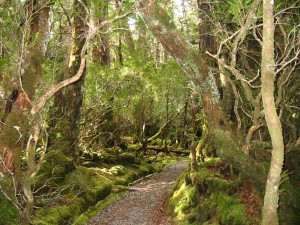 We went on to circumnavigate the island before heading back to the north-west coast to Devonport to catch the Spirit of Tasmania to Melbourne. There was just time to revisit Cradle Mountain, and walk around Dove Lake in that lovely high mountain country that seems to have been designed by Tolkien. 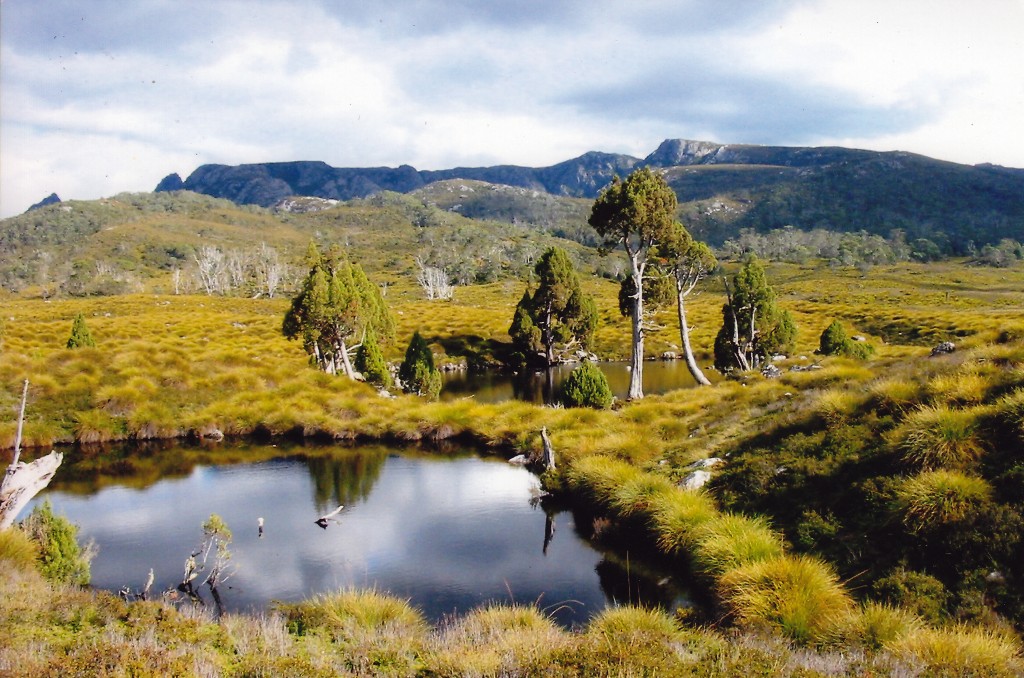