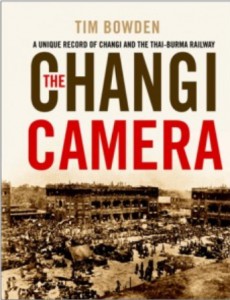 THE CHANGI CAMERA, by Tim Bowden, is a unique record of Changi and the Thai-Burma Railway. (Published by Hachette Australia, 1 October 2012.)

Available to purchase for $46.00 including postage and handling within Australia.

The Australian troops captured by the Japanese in Singapore in February 1942 had given no thought to being prisoners of war. They had intended to win, and the sudden collapse of the Allied forces left them bewildered and demoralised.

Private George Aspinall, from Wagga, joined his fellow Australians in the dispiriting march to Changi immediately after the surrender, with whatever extra food and gear they could carry. In his pack the 18-year-old teenager carried his folding Kodak 2 camera, given to him by his uncle as a departure present. That camera would capture rare images of three-and-a-half years of captivity – later used in evidence during the post-war War Crimes Trials of Japanese atrocities. 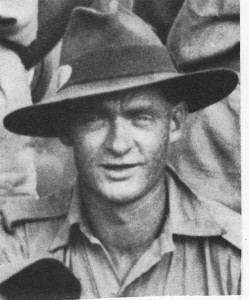 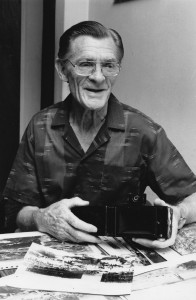 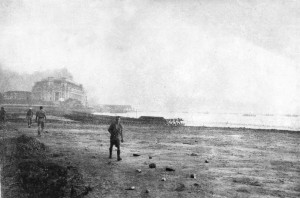 George photographed this desolate scene on the Singapore waterfront on 16 February, 1942, the morning after the Allied forces surrendered to the victorious Japanese. 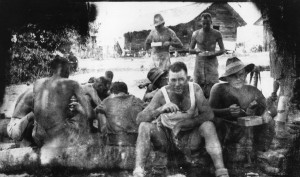 Here a group of Australians are munching mournfully through their dixies of rice – an unfamiliar staple diet they would get to know well over the next three-and-a-half years.After smuggling his camera into Changi, George could take photographs with little risk, and he documented the new life of his captured comrades.

In the early days of Changi, before the work parties were sent out, boredom was the main enemy of the troops. The  Changi Concert Party was formed to entertain the troops. I recorded them in action at Victoria Barracks in Sydney in 1981.

Some of the early work parties sent out were to the Singapore docks, where the Australians found themselves in a wonderland of contraband – the wharves full of food, liquor and other valuable cargo which they quickly appropriated for themselves and their friends. The Japanese had made the captured Allied soldiers members of the Imperial Japanese Army – an honour that sat lightly on their soldiers. Their enthusiasm for thieving surprised the Japanese, who themselves, were scrupulously honest in such a situation. They were not pleased when they found out what was going on, as George Aspinall describes.

Having nicked whatever they could, the next problem for the POWs was how they could get it back into camp when all they wore was a slouch had and a loin cloth. The answer was the delicate art of ‘crutching’.

By mid 1942 the Japanese decided to make use of all the free labour in Changi to build war- related projects like the Thai-Burma Railway and an aerodrome at Sandakan in Borneo. On the Thai-Burma Railway, the Australians joined other American, British, Dutch and thousands of Asians, as forced labour. They were expected to work with little food, constant bashings suffering from dystentery, malaria, beriberi and skin diseases like pellagra which developed through lack of vitamins.When the wet season came, the Australians expected they might be taken away to wait for better weather. They were wrong. 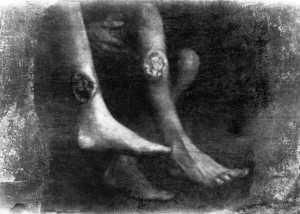 These tropical ulcers would expand, often exposing a man’s leg bones. By then, amputation was inevitable.

By this stage George Aspinall was determined to make a record of the appalling privations on the Thai-Burma Railway. The POWs developed terrible ulcers on their legs, sometimes leading to amputation, often performed without anaesthetic. The Australian medical officers asked him to photograph some of these ulcers, which he did.

As if conditions weren’t bad enough in the wet season, there was an outbreak of cholera in the camps.

George Aspinall knew that his photographs would not survive the tropical conditions unless he processed each negative as he took it. He had brought with him from Changi little medicine bottles of developer and fixer. After a back-breaking day building the railway, he would go down to a nearby creek at night, with a groundsheet over his head to keep out the star light, and process each negative which he dried and stored in a Town Talk tobacco tin. His iconic photograph, the so-called Three ‘Fit’ Men remains one of the enduring images of that terrible time, displaying the skeletal state of three Australians deemed by the Japanese to be fit enough to work on the railway. 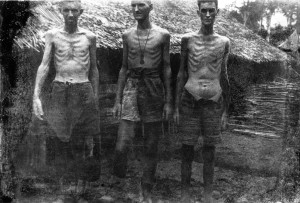 Note, despite their skeletal bodies, these men have legs swollen with oedema caused by beriberi.

What had begun as a hobby for George Aspinall to show to his family when he got home to Australia had now become an important documentary record of captivity. Although one in three Australians died in some of the camps on the Thai-Burma Railway, the Australians survived better than the British, Americans, Dutch and certainly the Asians who died in countless thousands. There were reasons for this. Many of the Australians in the AIF were bush boys, fit, and able to construct rough shelters and light fires in pouring rain. There was also the all important Aussie ingredient of mateship.

Towards the end of 1943, with the railway nearly finished, thorough searches by the feared Japanese secret military police, the Kempeitei forced George to break up his precious camera and throw it down a well. It’s discovery would have been a death sentence. But he managed to conceal his Town Talk tobacco tin with its precious negatives, which were handed over to his commanding officer on return to Changi, and buried with other important documents in a sealed contained concealed in a toilet borehole. George’s photographs were used at the Rabaul War Crimes Trials after the war to show the vile conditions that POWs had been forced to work against the Geneva Convention, which the Imperial Japanese Army never recognised anyway.

In the early 1980s the  ANU historian Dr Hank Nelson and I began interviewing former Australian POWs for the radio documentary series Prisoners of War – Australians Under Nippon. When I interviewed George Aspinall, in 1982, I discovered George still had about 100 images, stored randomly in a desk drawer at his Sydney unit that iead to my writing Changi Photographer published in 1984.
Now, The Changi Camera has reproduced George’s remarkable story and photographs, accompanied by a contemporary essay by me on the once-neglected experiences of Australian prisoners of war of the Japanese.

These courageous Australians not only fought bravely before being captured, but then faced a greater threat of death by starvation, tropical diseases or the random act of brutality by a guard, than normal active service life could deliver. Their stories deserve to be told, and told again, to a new generation of Australians.

IF YOU WISH TO LEAVE A COMMENT ABOUT THIS ARTICLE OR ANY OTHER TOPIC ON THIS BLOG PLEASE USE THE CONTACT BUTTON UNDER THE HEADER BAR.