I’m beginning with a very personal story, The Way My Father Tells It — The Story of An Australian Life. How many of us have regretted not recording, or writing down more details of the lives of our older family members. Well I did. 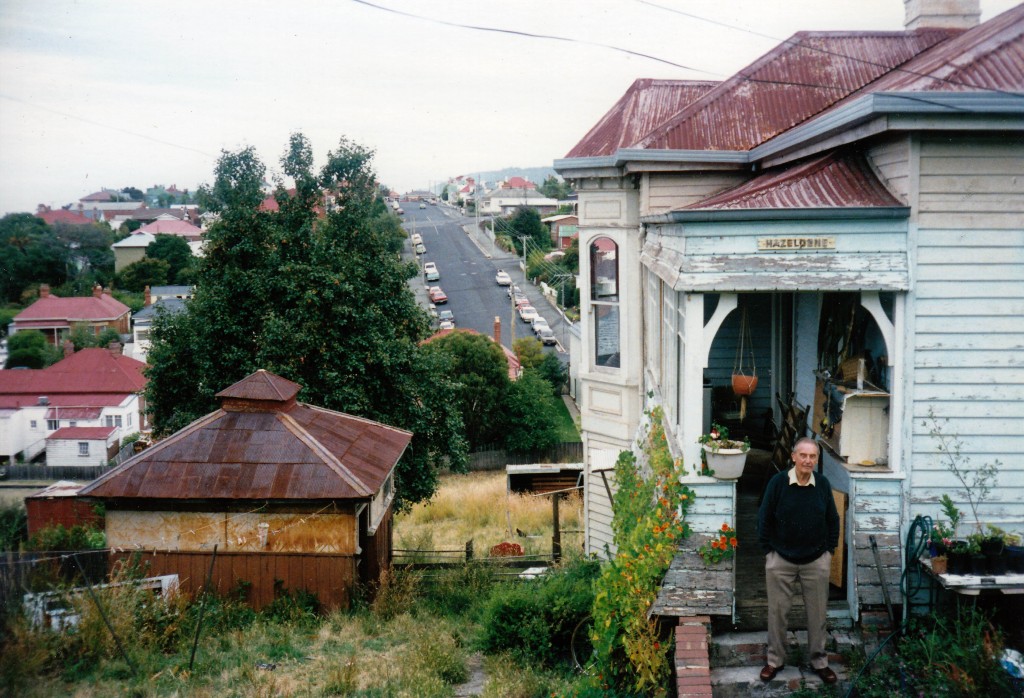 John Bowden, revisiting his old family home Hazeldene in North Hobart in 1987, sixty years since he last saw it. Incredibly it was unchanged, and the old ‘Summerhouse’ where he slept with his father and two other brothers in the garden was still there too.

My father John Bowden effectively lived the entire 20th century. He was born in 1906, and ‘woke up dead’ in his own bed in his own home in Sandy Bay Hobart in 1998, at the age of 91. He was the youngest of six children, and the last left alive.

In 1982 my mother Peg (70) died after a long struggle with the ravages of rheumatoid arthritis, cared for by my father. Theirs was a close a loving relationship, and he was devastated by her death. Conscious of the fact that I knew very little of our family history, and that once my father had died, there would be no way of identifying old family photographs or knowing about not only his generation, but the generations before he was born. Trying to find a way to assuage his grief, I suggested (after a year had passed) that he begin recording his memories of the Bowden family, growing up in Hobart, his family life, moving on to his courtship and marriage with Peggy Lovett, his service with the AIF in Palestine in World War Two, and returning to start a family life.

As he was comfortable with talking on tape, I sent him some fairly basic oral history questions, and he began a series of recordings that he sent to me for transcription. I thought he was producing some pretty good stuff, but felt too close to the material to judge it. I asked my editor at ABC Books, Nina Riemer, to have a look at what he had done and she agreed it seemed very promising and suggested we continue with the project, perhaps, of producing a book. 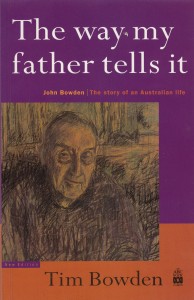 Early edition of The Way My Father Tells It

And so it was, that in 1989, the first edition of The Way My Father Tells It was published.

As an oral historian I have always believed that so called ‘ordinary’ people have extraordinary stories to tell. So called ‘tall poppies’ sometimes use oral history as a pathway to self-aggrandisment. But my father, John Bowden, had no reason to do that. He was surprised that anyone outside the family would take an interest in what he had to say, and had vivid memories of his early life, which he shared with a wry humour and complete honesty. There was another element to this project which intrigued me. Interviewers often control the agenda to a large degree. There is nothing wrong with this, except that it produces material skewed, if you like, to the interests of the interviewer. The fact that my father was recording untinterrupted by me, led to a different style of oral history, perhaps closer to the story that my father wanted to tell.

Often you could tell that he had thought of an anecdote in passing, that he had not thought of beforehand. What should he do about this, he asked me? I said go ahead and tell it, and I can always bring you back on track later if you forget to finish the topic you had embarked on.

Sometimes these unexpected memories brought colour to his narrative. Here is one example. Father was recalling a character in Hobart in the early 1920s, one Tommy Hopkins, who composed and played music for a small group to perform during the silent movies of the day. Listen to how my father told it:

Historian Hank Nelson, at the Australian National University, also looked at The Way My Father Tells It with an outsiders eye:

Although this is about an urban Australian family, the Bowdens lived close to the farming frontier, and often crossed it. John’s story demonstrates that for many Australian suburban families before 1940, there was no sharp barrier between city and the bush. That is a false distinction. the Bowdens were as familiar with hand-milking and chook feeding as they were with Argyle St. 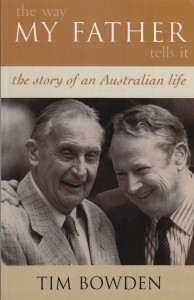 To Father’s great surprise, the book was a great success and after two hardback editions sold out, it was reprinted in paperback five times. It was last reprinted in 2002, and is still available through this web site. People wrote to him from all over Australia to thank him for recalling a long-gone Australia from the horse and buggy days through to the advent of television, manned flight to the moon and computers. Some of the letters came to me, sometimes asking tactfully if John Bowden was still alive. So well had he shared his life, and his friends and family, that I had the strong feeling hearing that he had died would be equivalent to losing a close friend.

When The Way My Father Tells It was first published, the Canberra Times commented:

‘John Bowden has much in common with Bert Facey, author of A Fortunate Life. Bowden deserves to be placed in that company.’ 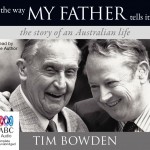 Audio Book of The Way My Father Tells It

An unabridged audio version of The Way My Father Tells It has been published by Bolinda Publishing, using excerpts from my father’s original tapes in his own voice. It is available using this link: http://www.bolinda.com/aus/search/results.aspx?/1/22CCD945-A19C-4CB0-9D51-C5D5DDEDAEA2/1/0/1/1/1/1/1/3/way%20my%20father%20tells%20it 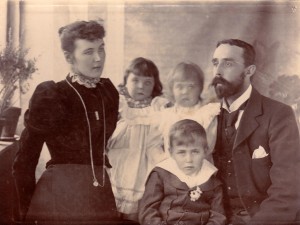 The Bowden family circa 1900, with three of the six siblings. From left: Grace Bowden, the eldest daughter Dorothy, then Marjorie and Frank Bowden. Eric, the eldest son, in front. 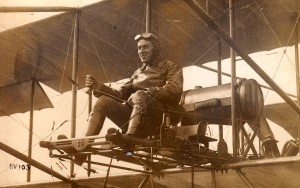 Eric Bowden learning to fly with the Royal Flying Corps during World War I in England. 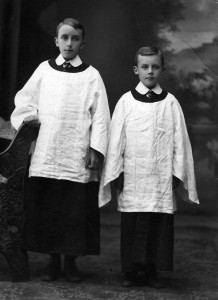 John’s elder brother Philip (left) and John as choir boys at Holy Trinity Church in Hobart. Their father Frank, was the choir master. They both gave up the choir and the Anglican Church not long after this photograph was taken. 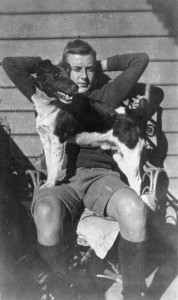 John Bowden at 14 with his first dog, a fox terrier called Spike 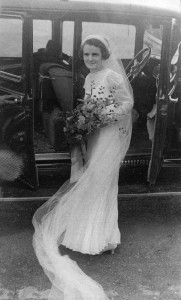 Peggy Lovett heading for the altar at St Oswalds’ Church Launceston on 14 April, 1934 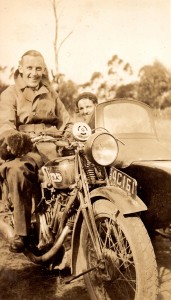 During their courtship John bought a motorbike and side car. Peg is seen here riding in the side car, but usually Johns Alsatian dog Thor was in it, and Peg on the pillion much to the raucous delight of passers by. 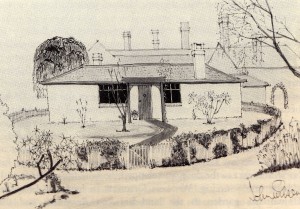 When John and Peggy Bowden moved to Hobart not long after they were married, they rented a little cottage in the grounds of a historic home in North Hobart called Runnymede 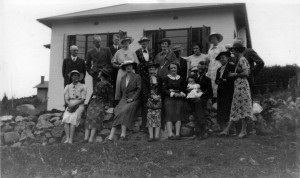 John Bowden managed to buy a block of land at 37 Maning Ave Sandy Bay, Hobart, and build a small brick house just in time for their first son, Tim, to be Christened in 1937. 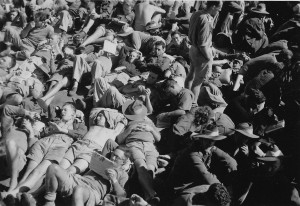 When Captain John Bowden left Palestine in 1943 to return to Australia on a requestioned little cargo ship, the Dorset, the army asked the captain how many men he could accommodate, and he said ‘About 20′. He got 1000 men, some of whom are seen here trying to get some deck space in the Red Sea. Father is in there somewhere. 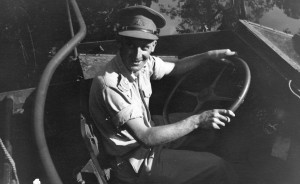 Back safely in Australia, Major John Bowden is photographed driving an army amphibious DUKW near Noosa in North Queensland in 1944.

Available to purchase for $38.50 including postage and handling within Australia.