SPOOKING THROUGH – AN IRREVERENT MEMOIR

When I was a teenager I read an engaging book titled How to be an Author by Denys Val Baker. It’s first chapter, I recall, was titled ‘The Importance of an Unhappy Childhood’. Mr Baker made it very clear that serious writing would elude a nascent author whose happy family life, doting aunts and stress free middle class upbringing had eased him seamlessly and happily into adult life. 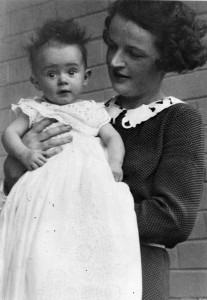 Tim and mother Peg at his Christening, 4 months old. Surprising early hair looks as though I was plugged into an electric light socket.

Those who survived an upbringing by an alcoholic father (or mother) domestic violence, beatings and a schooling marked by being a victim of bullying and sadistic cane-wielding teachers, starved in a Spartan boarding house and thrown homeless on to the streets at thirteen years of age, had a much better chance of writing a best-selling first novel.

Being a victim (as far as writing was concerned) of the first scenario, I realised that novels were beyond me. But as English was the only subject at school that (a) engaged me and (b) I was any good at, led me towards a career in journalism. I was able to get a cadetship on The Mercury newspaper in Hobart in 1955 (three years after Mr Baker’s amusing but dispiriting book had been published) and began a career in journalism that lasted over forty years and have not had a nanosecond’s regret. The one good thing about journalism (if you liver can withstand the ferocious drinking that goes with that particular turf) is that it gets you into all kind of remarkable situations that you would otherwise have not found yourself.

I quickly developed a fascination with writing and broadcasting good stories, which is the bread and butter of the trade. Quite quickly I moved from print journalism to radio, and eventually television – which did not become established in my home state of Tasmania until the early 1960s,

The move to radio happened just after I had qualified as a D Grade journalist with The Mercury. A friend of my parents who was a senior Australian Broadcasting Commission (as it was then) executive had come to Hobart temporarily from Sydney. James Pratt and my parents John and Peggy had worked in the local Repertory Theatre in the pre-war years. ‘What’s the boy doing these days’ he boomed cheerfully. (Jim was a big man in body, voice and presence.) Told that I was a journalist with the local paper, he told my parents to ask me to come and see him. 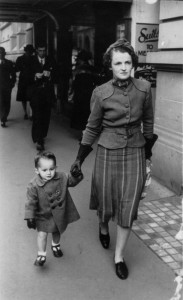 Peg and Tim in Hobart circa 1940 snapped by a street photographer to send to John Bowden then in the Middle East with the AIF. 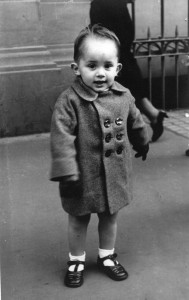 As I already had a job, I was a bit mystified about why he wanted to see me, but went along anyway. Jim was then acting as head of the ABC’s Hobart Talks Department, responsible for a curious mix of arts, current affairs and even religious broadcasting. He introduced me to his assistant, Anthony Rendell, and suggested to me that I do some freelance work (moonlighting obviously) for the ABC. There was a five minute local program at 6.55 pm in the evening called Tasmania Today – just a general interest slot really – Anthony was told to instruct me in the art of using a portable recorder and preparing a colour piece on a wool auction that was being held in the Hobart Town Hall, conveniently just across the road.

People think I am joking these days, but I was handed a wooden box with a red vinyl cover called a CEB, which was a recorder actually driven by a clockwork mechanism! There was a battery to record the sound of course, but the spools were driven by a clockwork spring, and it had a little handle on the side to wind it up if your interviewee spoke for longer than four minutes.

Actually it wasn’t quite four minutes, and when the tape started to slow down it had an unfortunate reverse result in replay where your subject’s voice started to rise in pitch, and if you didn’t wind the spring, would turn into unintelligible gibberish like some of the madness produced by to the BBC’s wonderful comedy program the Goon Show. 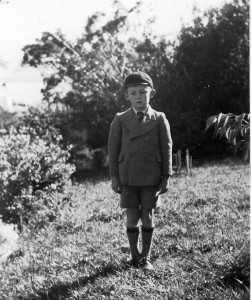 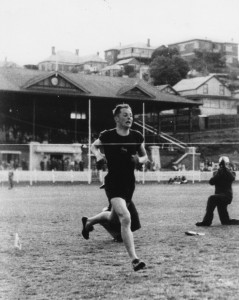 The reporter wore this box over one shoulder by a canvas strap, and held a big black microphone with his left hand, and kept the right hand free to wind the little handle of the CEB like an organ grinder. Juggling your notes at the same time was a bit of a problem. A bit like the old joke of the one-armed paperhanger with the crabs.

Anthony Rendell told me to go over to the Town Hall and record at least five minutes of a ‘bed’ of sound – the yips and yelps of the bidding going on at the wool sale. Then I was to find a wool buyer, or auctioneer, try and find a quieter spot and interview him about his life and what he did. Later, Anthony explained, the interview would be edited by cutting unwanted bits out with scissors and splicing the tape back together with stick tape, and the sound I had recorded earlier would be running in the background as atmosphere.

Remarkably all this worked out. I remembered to wind the spring, recorded the bidding, and found a wool buyer, who could talk under wet cement. It all came together and was broadcast that night. (I think I must have used another name to keep The Mercury in the dark.) 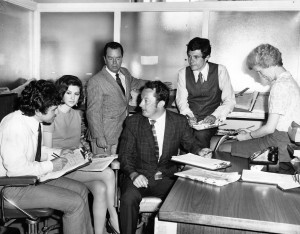 As I listened that night to my very first broadcast, withthe sounds of the bidding and the engaging voice of the wool buyer who was funny as well as informative, I was instantly hooked by the excitement of radio being able to take the listener on such an audio journey. I realised I could not have written that story to have anything like the impact of that wonderful feeling of ‘being there’ that radio does so well.

I suppose from that moment I continued to develop a fascination with oral history – recording the stories of so called ‘ordinary’ people on tape, who of course were often far from ordinary and had extraordinary stories to tell.

In 1960, in the fashion of those times, I went by passenger ship to England (via Jakarta, Singapore, Cochin in India, Aden, Suez, Naples and Genoa) bought a Vespa motor bike and rode it to England over the Brenner Pass through Switzerland and France, and eventually got some freelance radio work with the BBC.

Back in Tasmania in early 1963 I joined the staff of the ABC in Launceston, and worked in both radio and the new medium of television. I won a job as a foreign correspondent in Singapore in 1965, and worked in South-East Asia for the next two and a half years covering the Vietnam war among other stories, until being posted to New York in 1967, and then back to Sydney where I started the ABC’s radio current affairs PM in 1969.

The ground-breaking current affairs program This Day Tonight compered by an old friend, Bill Peach, offered me a job in 1970 as a producer/reporter, and in 1974 I returned to radio and a change of pace with the Radio Drama & Features Department, able to specialise in oral history based documentaries. I was able to start a dedicated Social History Unit in 1985, which I am glad to say, is still going. 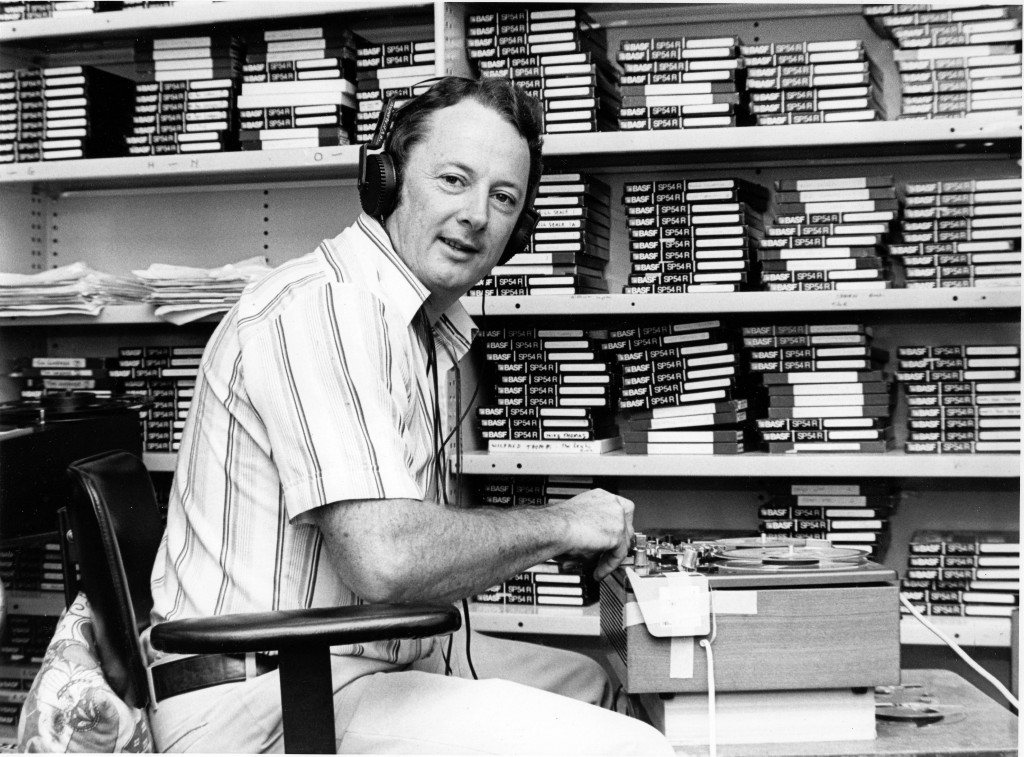 Because journalists find themselves in unexpected places – I suppose covering wars in Indonesia, Vietnam and later making documentaries in Antarctica would be examples, I decided in 2003 to write about some of these experiences, Spooling Through – An Irreverent Memoir. I have always tried not to take myself too seriously. 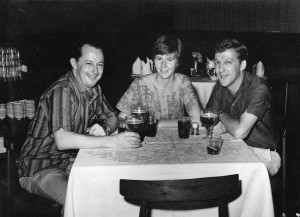 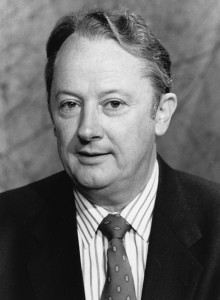 The world of journalism changed drastically during my time in it. By the 1970s, journalists were writing their stories gazing into green computer screens, straight into the paper. The hot metal and thundering presses stilled forever. In television, film was replaced by video tape, and eventually went digital.

In radio, the quarter-inch magnetic tape that had lasted me over 40 years of my broadcasting career was gone too, as digital recording and editing on computer screens took over.

Mercifully I got out before foreign correspondents in particular were driven crazy by instant satellite-based communications through mobile phones and digital cameras, hardly able to take stock of a story they are covering while they service the insatiable demands of their news editors around the clock. Mine was a relatively more relaxed time, but I have nothing but admiration for the way today’s generation of journalists and radio and television reporters manage to do what they do.

Perhaps ‘spooling’ was a curious word to use in the title of my memoir, as today’s digital generation must wonder what it means. It refers to tape ‘spooling’ from one reel to another. But I’ve also kind of spooled through life too, and this book is the result. 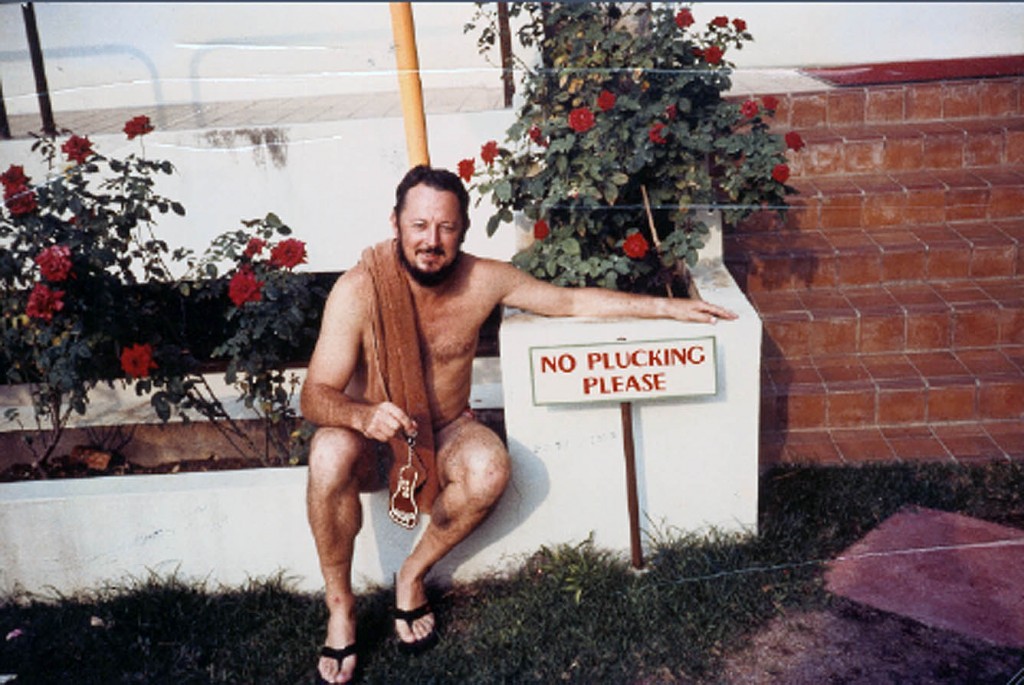 Some excellent advice at a Malaysian hotel, 1977

Available to purchase for $38.50 including postage and handling within Australia.