We were completely unprepared for the magnificence of the gallery suddenly revealed. A shiver ran up my spine as I saw for the first time the great white Wandjina spirit figures, two and three times larger than human scale. 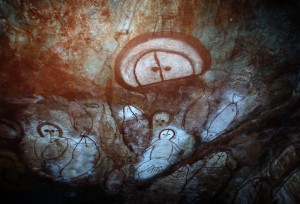 These superb Wandjina paintings are on the roof of a cave behind Raft Point on the Kimberley Coast. 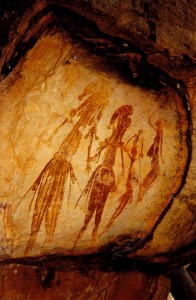 And these are the first Bradshaw paintings we ever saw, found under a rock overhang near the Prince Edward River on the Gibb River Road, Kimberley.

I can still recall that shiver when Ros and I first visited some of the superb Aboriginal rock art galleries in the Kimberley, where the so called Bradshaw cave paintings are also found, but pre-dating the Aboriginal Wandjina rock art by many thousands of years. They are quite different – to my eye rather Asian – with graceful dancing figures wearing amulets, ceremonial hats and charms dangling from their arms.

It was no accident that the second book of Penelope and The Manor’s travels took us back to Western Australia, this time to the north. With more time at our disposal this time, we chose to explore the Kimberley by land and sea, where dramatic twelve-metre tides guard coastal locations unchanged by time – still as the 17th century buccaneer Willam Dampier first described them. For three months we travelled this remarkable region from the improbably sculptured Bungle Bungles to the Pilbara and the wildflower-filled Mid West.

On our first summer journey in 1997-96, we had to stay close to the coast to avoid being fried. Having not done any major driving and camping forays since the early 1980s we were astounded by the numbers of fellow-Australians (and overseas tourists) on the road. We were mindful of an excellent television documentary we had seen on the ABC produced by Steve Westh, The Grey Nomads, charting the progress of a cross section of the hordes of chronologically-challenged travellers ceaselessly circumnavigating the continent on Highway One. Not only did Ros and I meet them, we joined them.

In 1999 we prepared for our dry season Kimberley journey. The area was not entirely new territory to us. In 1982 we had hijacked our two sons Barnaby (10) and Guy (7) from primary school for a similar period when we drove in our  venerable split-screen VW Kombi van towing a box trailer, through New South Wales and north-west Queensland, via Boulia and Longreach to Katherine before tackling the Gibb River Road with its creek crossings and boulder-strewn track from Kununurra to Derby, and then to Broome. 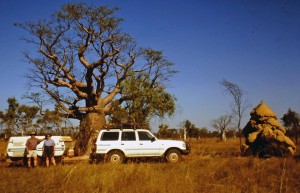 Penelope, The Manor and owners in the Kimberley – a unique landscape complete with bulbous boab tree and equally rotund termites’ nest.

Penelope, The Manor and owners in the Kimberley – a unique landscape complete with bulbous boab tree and equally rotund termites’ nest.

The Kimberley, with its grotesquely obese boab trees, red sandstone mountain ranges and dramatic land and light-scapes enchanted us. We marvelled at the vastness of man-made Lake Argyle, fished for the elusive barramundi in sedate dry season streams and kept a wary eye out for crocodiles. The grey nomads were evident even in 1982, a clutch of them camped near the bridge over the Victoria River under shady gums in those bulbous 1950s style caravans where a hoop of ply board was stretched over a frame. Most were pensioners, supplementing their tucker by catching barra from the river and saving up their pension cheques to cover petrol for the next move. They were raucously cheerful and full of life, joyously aware that geography and circumstance had blessed them with a life Riley would have envied. I kept them in mind. 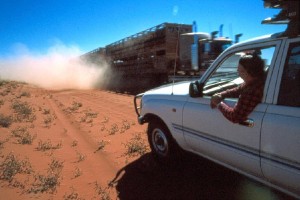 When you see a road train approaching on the Tanami Track, it is prudent to get off the road and stop! 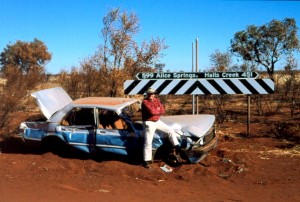 The turnoff to Rabbit Flat on the Tanami Track – the only fuel available between Yuendumu and Halls Creek. This car is clearly beyond needing fuel.

By June 1999 my two female companions and I (I travel with two women, Ros and Penelope) were ready to take to the road again. The plan was to drive from Sydney to Broome in two weeks – fast travel by our standards, but essential if we were to catch the big catamaran Coral Princess for a ten day cruise up the Kimberley coast, exploring that majestic fractured coastline with its twelve metre tides and ancient red sandstone ramparts, before returning to Broome and resuming our more leisurely travel habits. 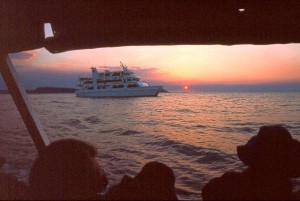 Coral Princess at anchor off the Kimberley Coast at sunset, viewed from her excursion barge Explorer which carries 48 passengers.

Our route to Broome was to be via Port Augusta (barely pausing for breath), up the Stuart Highway to Alice Springs, then driving the Tanami Track to Halls Creek. After the coastal cruise we planned to return to Halls Creek, drive in to the Bungle Bungle National Park (not in existence when we were last through) and head on to Kununurra on the Ord to prepare for the Gibb River Road.

After that we thought we’d give Penelope her head down into the Pilbara and the Mid West of Western Australia, questing for national parks and wild flowers and whatever else took our fancy. It would all be new country for us. That, surely, is what our kind of travel was all about. A quick sashay across the Nullarbor would bring us back to Sydney.

Penelope needed a little attention. Stiffer springs in the rear, to cope better with extra gear on board and with the weight of The Manor’s towbar. Having our tail higher in the air had the added bonus of giving us some rear vision over the top of the camper. We also gained a few centimetres in height through fitting narrower tyres, on split rims, to replace the squashy, wide radials that I had inherited with the car. I was advised that the fatter tyres were likely to have their side walls slashed in some of the limestone country we would be passing through in the Kimberley. There was also an advantage in having the same gauge tyres as well as wheels on both Penelope and The Manor. 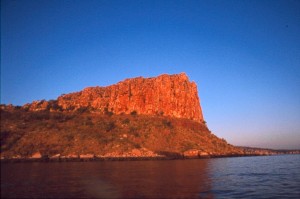 A typically spectacular Kimberley headland. The region has some of the most ancient rock formations in Australia. 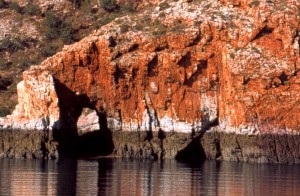 The Kimberley coastal cliffs clearly show the rise and fall of the areas’s famous 12 metre tides. 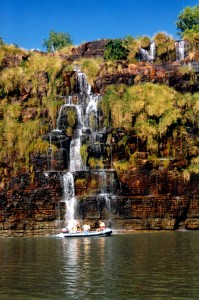 The spectacular Cascades on the Prince Regent River were first sighted by the British explorer Phillip Parker King in 1820 – a welcome source of fresh water. Sadly an American tourist was taken there by a crocodile in 1987. Swimming definitely not advised. 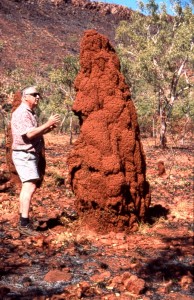 Inside Penelope, I took out the back seat and moved the cargo barrier forward to its second position just behind the front seats. Into this extra space went big fishing-style heavy plastic bins with essentials such as our wine cellar and deep storage for unperishables like pasta, Asian spices, dehydrated peas, tinned fruit, canned ham and dried fruit. There was space between the cargo barrier and the front seats to slip in folding tables and two extremely comfortable collapsible chairs in small holding bags. The general cargo space easily encompassed a ladder (for getting up on the roof rack), camp oven, Coleman pressure lamp, a smallish three-way fridge (strapped down to stop it wandering about), two water containers and various boxes for boots, bush shower and other camping necessities—which included our historic Hong Kong wooden tucker box (complete with Chinese characters and preserved ginger stencil), its top doubling as a cutting board.

Two big sliding drawers built in to the rear section provided easy access to tools, spare jack, tow rope, extension leads, tow ball and shaft (when not in use), snatch strap, shackles, extra oil, spare engine belts and hoses, our portable barbecue and two handles for erecting The Manor into camping mode. I only carry a modest tool kit, because I am not very handy. Just about everyone else we meet off the beaten track is either more mechanically gifted than I, or a fully fledged bush mechanic with a portable welding outfit. As Ros has noted , a raised bonnet lid in a camping ground is an open invitation for male bonding. Within seconds a cluster of faces is discussing the problem. 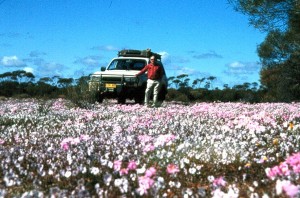 As we neared Geraldton and a lunch stop we were in the classic spring Western Australia wild flower season.

Two days before our departure date we retrieved The Manor – which was kept at boarding school out at the Jayco caravan centre then at Minchinbury near Sydney in between trips – and loaded it with linen, sleeping sheets, blankets, and our spare clothing kept in bins under the bench seats on either side of the table. We carried two rechargeable battery Coleman lamps for reading in bed. I had a longer cable made to carry 12 volt power from our auxiliary battery in Penelope to The Manor while in camping mode.

On the back bumper bar of The Manor were two extra jerry cans for fuel and water, and an extra gas bottle. We carried 110 litres of water when fully loaded—60 litres in the under-floor tank of The Manor, two 20 litre jerry cans, and one 10 litre container for daily use. This is not excessive when travelling in the waterless outback, particularly when so much of the bore water in places like the Pilbara is so hard and full of minerals that it’s a wonder the tails of the cattle don’t calcify into limestone and snap off.

I carried a Macintosh Powerbook  in the clothes locker of The Manor to keep a diary or access and send email from time to time – in those pre wi fi days when we could get access to a phone socket. On occasions we found ourselves trying to explain to motel managers why we wanted to hire one of their rooms for ten minutes.

‘Just to use the phone socket’.

‘Oh really? Are you sure that will be long enough?’ (Nudge nudge, wink wink.) 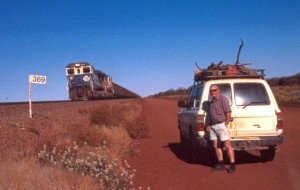 We happened to see one of the huge iron ore carrying trains in the Pilbarra approaching us and had time to stop and photograph it. 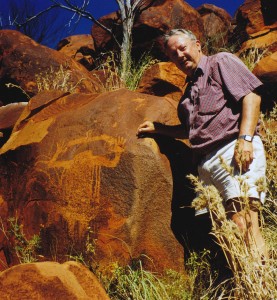 If you know where to look, you can find good examples of petroglyphs – Aboriginal rock art engraved into the tough sun-burnished oxide of the Kimberley boulders. We found these not far from Marble Bar, in the Pilbara.

Available to purchase for $36.50 including postage and handling within Australia.