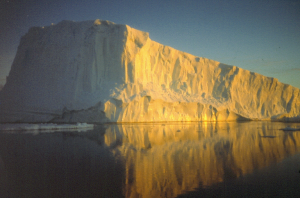 ANTARCTICA & BACK IN SIXTY DAYS BACK IN PRINT AGAIN…

I am absolutely delighted to have Antarctica & Back In Sixty Days in print again for the first time since 1999. There is always something special about a first journey to Antarctica, and mine was a corker – and at a pivotal time in the Australian Antarctic Division’s history too.

Voyage Six in 1989 was part of the new era of shipping to the Australian Antarctic Territory. The little Dan ships had reigned supreme since the Kista Dan first broke through to Mawson Station in 1954, and the long serving and much loved Nella Dan bridged the change to larger ships until it sadly sank in Buckles Bay at Macquarie Island in 1987.

The German-chartered ship Icebird was a vastly bigger ship which could take not only more cargo than before, but its accommodation module plonked on to the ship in front of the bridge, could carry 111 passengers. This meant that from 1984 people other than the expeditioners could go south on round-tripping ‘jollies’, as the ANARE (Australian National Antarctic Research Expeditions) parlance has it. A mixed bag of artists, journalists, film-makers, authors, politicians and other worthies – we even had an environmental philosopher on my Voyage Six – were able to go south on Icebird and later applicants also on Australia’s first icebreaking research and resupply vessel, Aurora Australis.

Being a novice JAFO (Just Another F***ing Observer in ANARE-speak) I did not realise what a great time it was to go to the Australian Antarctic Territory. The rebuilding program meant that many of the old historic huts at the three Continental stations would have to go, and that traditional loading and unloading methods were about to change. The Army ‘Larcies’ (who operated the amphibious LARCs) were still plying their trade, and adding richly to the culture of their voyages it should be said. The huskies were still at Mawson, with their banishment only two years away. The old Mess building at Mawson had not been pulled down, although the unfinished double-storied metal-clad Red Shed that replaced it was already in service. In short, my timing was fantastic. 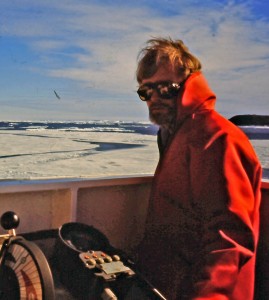 Captain Ewald Brune on the flying bridge of Icebird

The Captain of Icebird was a very young looking, blond lively fellow Ewald Brune, who encouraged jolly times in his favourite haunt on board, Stoppy’s Bar. Practical jokes were encouraged – not that ANARE culture was ever without them. Brune had had Antarctic experience, in fact he had one of his ships Gotland II, crushed in the ice and sunk in the Ross Sea eight years before, in 1981. Although not a good look for ice captains, his company obviously took the view that he had learned by this experience!

Brune had made much of the ice-breaking capacities of Icebird promising the Antarctic Division that he could get into Mawson Harbour well before Australia Day, 26 January. When we arrived at the ice-edge, 30 kilometres of fast ice stopped us from getting to Horseshoe Harbour as he had promised. For two weeks Icebird waited impotently at the ice edge, while helicopters ferried mail, fresh vegetables and some lucky JAFOs to and from Icebird to Mawson Station. 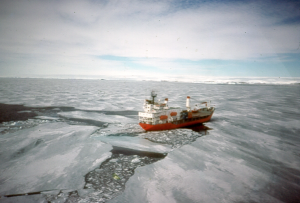 Icebird, unable to break through the fast ice, languishing at the ice edge 30 kilometres from Mawson Station.

There were some elaborate practical jokes while those on board were going  stir crazy off the ice edge. The saga of the frozen pig was a good one. When a carcase wouldn’t fit into the Squirrel hold, and was strapped into the front seat beside the pilot. The Larcies put a hat and sunnies on the frigid porker, and a headset as well. The pilot took it on himself to radio ahead that they had a serious case of hypothermia on board, which was taken seriously. A full hypothermia emergency response cranked into gear as the very dead pig made it to the landing pad. 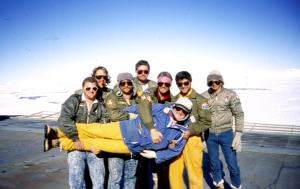 Another joke I have to take some responsibility for, although the inspiration was not mine, but another JAFO Geoff Taylor, who ran an engineering firm in Hobart. He thought that it might skitch up our four Labor politicians on board (there was one National Party polly representing the Coalition) by concocting a fake news item on the incoming telexed news service that the then Treasurer, Paul Keating, had resigned to take up a position on the World Bank board. But Geoff said he wasn’t sure he could word a credible news story. I and a fellow reptile of the press, Keith Scott obliged, and the bait was laid and taken. Some very worried Labor parliamentarians gathered in the mess to work out what they could do. One, Milton Morris, was heard suggesting that perhaps the Russians could fly them back! This furphy ran for a good 24 hours before it exploded. Full details in Antarctica And Back In Sixty Days! 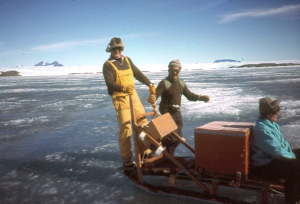 How lucky can you be? A dog sledge ‘jolly’ on the sea ice near Mawson Station. The dogs were taken out, for ‘environmental reasons’ in the early 1990s. 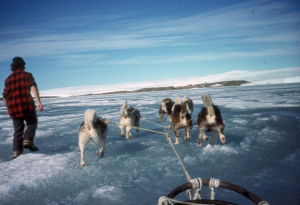 This book is not entirely stuffed with  fun and trivia. By the time I joined Voyage 6 in 1989, I had managed to interview old ANARE hands like John Bechervaise and pioneering photographer Alan Campbell-Drury (his great shot of a lenticular cloud over Big Ben in 1948 is in the book), Phil Law of course, and transcripts of on-board chats with old hands like Des Lugg (our Esteemed Voyage Leader) are there too. 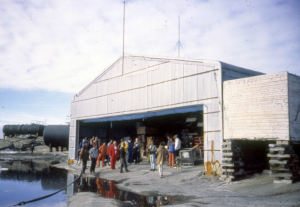 The first ever hangar in Greater Antarctica was built at Mawson Station in 1956 to enable aerial explorattion. 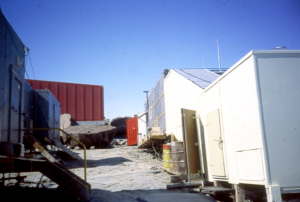 Many of the early Mawson buildings were still standing in 1989. But the old mess (right) had already been moved to the Red Shed taking shape in the background. Unlike the hangar, it has now been demolished.

Adventures continued, like our skipper Ewald Brune getting carried away breaking fast ice at Davis and stranding Icebird on an uncharted rock near the top of a high tide! 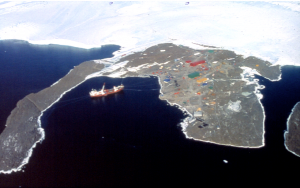 After unloading at Davis Station to the west, Icebird returned to Mawson to find the fast ice had gone, and finally entered Horseshoe Harbour. 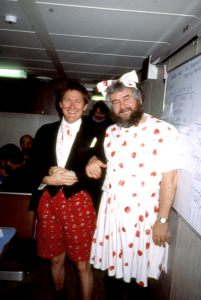 Outbreaks of transvestism in the previously all male Antarctic stations still take place. In this case, Pip Turner (left) one of our chopper pilots, escorts ‘Wok; Bromhan, a meteorologist,to Icebird’s mess, after he unilaterally declared ‘Linda Rondstadt Day’.

One bonus for me, as a result of the Antarctica And Back In Sixty Days’ publication in 1991, was that I landed the gig to write the ANARE Jubilee History, The Silence Calling – Australians In Antarctica, 1947-97 and to write and present accompanying ABC television documentaries including the six-part series Breaking The Ice.

The re-born Antarctica And Back In Sixty Days can be ordered from the form below.

Available to purchase for $36.50 including postage and handling within Australia.