The urge to get out and see Australia has always been a strong one for me and my wife Ros. In 1974 we headed north from Sydney in a 1967 vintage split-screen Kombi, towing a 6 X 4 trailer, and headed for Queensland. Also on board was our 18-month-old son Barnaby (who has still not forgiven us for taking him on a trip he can remember practically nothing about!).

We followed the coast up to the Daintree, and then across the Atherton Tablelands to the Gulf Country, then to Three Ways and up to Darwin by November 1994, only a few weeks before Cyclone Tracy blew it all away. By that time we were heading south, down the then unsealed Stuart Highway south of Alice Springs, and eventually to Hobart where the Hobart Bridge fell down shortly after our arrival, hit by a cargo ship. Disasters might have followed us, but we were on the road for seven months in all, and loved every minute of it.

(Incidentally we had our faithful Kombi Gertrude for 11 years. I’m not sure why we chose that name, but Gertie took us to many far flung parts of Australia in school holidays and slightly longer trips. How that little air-cooled 1400cc engine ever managed to transport us and our gear for thousands of kilometres remains a mystery. But she did.

First erection of The Manor in our Sydney suburban laneway

We to wait until our two sons, Barnaby and Guy, grew up and left home, and I retired from the ABC in the 1990s, to become grey nomads and spend months at a time on the road. As you travel you note how people organise their camping rigs, be they towing caravans, camper trailers or mobile homes. Some manage from the boots of their cars, but we decided in retirement that a bit more comfort would be preferable.

At the Rosehill Camping Show in Sydney in 1997 we signed up for an off-road Jayco Flight – the smallest of the Jayco campers, but in Ros’s view representing super-luxury (compared with Gertie, our long dead Kombi) with stove, sink, fridge, double beds and plenty of head room. We had arrived at the show in our recently bought second-hand diesel Toyota Landcruiser Series 80. As we signed up for the Flight, Ros remarked to the Jayco rep, David Carrick, that it seemed so luxurious she was going to call it ‘The Manor’.

There is amazing space and comfort in this style of camper once you winch it up and pull the beds out. 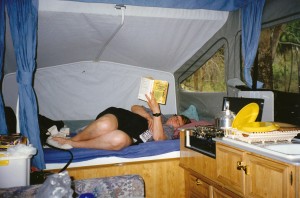 Ros thought the extra space inside The Manor, in camping mode, was rather like Dr Who’s Tardis!

As quick as a flash, David replied, ‘Well you’ll have to call your 4WD ‘Penelope’ then.’ (At the time the ABC was running a very popular TV drama series called To The Manor Born starring that wonderful British actress Penelope Keith.) Ros thought this was a great idea, but I was horrified.

‘We can’t drive around in a 4WD called Penelope! What about my hairy chested macho outback image?’

‘You haven’t got one’, said my partner in life. So Penelope and The Manor it was for the next eight years.

Being newcomers to towing a camper we took advice that it was a good idea to have the same sized wheels and tyres on the towing vehicle as the 4WD. These were bigger than the supplied wheels for the Flight, but just fitted in the wheel space with a few centimetres to spare. But the spare would not fit between the rear bumper and the body of the camper, so had to be mounted behind.

Now you change an established design at your peril, as we soon found out!

For our first journey we planned to drive from Sydney to Margaret River in Western Australia, across the Nullarbor Plain, of course, and back. We only had two months to do this, because Ros was inconveniently doing a horticulture course as Ryde TAFE, and university holidays were the only window of opportunity available. December and January were also high summer, so we hoped the Nullarbor wouldn’t be too stinking hot, but thought if we kept close to the coast in the south of WA, we would have quite pleasant temperatures – as we did.

First we had to get there. So, all packed up and heading down the expressway towards Canberra, we turned up the cassette player for our holiday song – Everybody’s Talkin’ (the theme song for the movie Midnight Cowboy) ‘going through the sunshine and the pourin’ rain, going whether the weather suits my clothes’ and so on. I moved out to pass a semi-trailer, and to my horror The Manor suddenly started to do a merry dance behind Penelope like Rudolph Nureyev on steroids. Somehow I controlled the situation, let the semi go through in the left lane, and when I could, slowed down and pulled over, still shaking with fear. We hadn’t been out of Sydney an hour and we nearly had the most horrendous prang which would have been the end of our trip and possibly us! 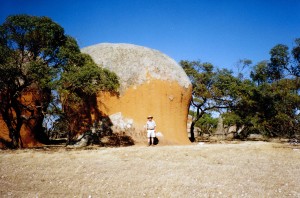 I had discovered in the most dramatic way what happens when your camper is running nose-light. By moving the spare tyre on the camper back over the rear of the bumper, I had dramatically altered the balance of the rig. It’s a bit like a fat kid and a skinny kid on a see-saw. The skinny kid doesn’t have to move very far back on his end of the plank, to balance the heavier boy. The spare tyre was the likely culprit.

We made a few phone calls and the Canberra Jayco people said they would help us if they could, but we’d better drive slowly and carefully to get there. We did.

The head of Spencers Gulf. Ros agreed with Matthew Flinders who noted in his diary on 13 March 1802: ‘Nothing of particular interest presented itself to detain us at the head of the Gulf, we got under way.’

I thought at the time that there may have been a road train driver on the Nullarbor who scored the trifecta on the one trip – a kangaroo, emu and a camel…

These great guys swung into action with their angle grinders and welding torches and moved the gas bottle brackets on the front tow bars forward, and mounted the spare behind them – in other words, moved it from the back to the front. Brilliant. We were then nicely nose-heavy, and The Manor towed superbly for the next eight years. And we were on the road again that very day.

I think it is always a good idea when you are travelling to find out as much as you can about the history of where you are going. The full length of the Great Australian Bight was first navigated by that superb mariner Matthew Flinders (the first cartographer to name our continent ‘Australia’), and the first east to west crossing of the Bight was made by Edward John Eyre during 1840 and 1841. Unlike the unfortunate Bourke and Wills, Eyre was a great believer in finding out what he could from the local Aborigines, including where to find the all important water. 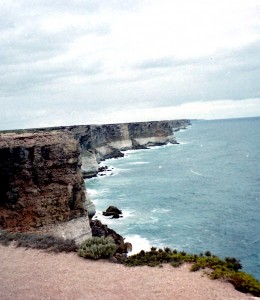 The well named Great Australian Bight. It is as though a giant cake cutter has sliced off the edge of the continent.

But the Aborigines themselves had never trecked from the east to the west around the harsh limestone cliffs that make up the unbroken ramparts around the Bight. Eyre decided to push on against their advice, and he and his companions nearly died several times before getting through. It is a simply amazing story, well worth finding and reading about.

As I usually do on a camping trip, I began to keep a diary and the idea slowly grew on us that our journey might be the genesis of a book. Penelope Goes West – On the Road From Sydney to Margaret River and Back became the first of four Penelope books, charting our travels within Australia over the next fifteen years.

This book, detailing our personal travel adventures, the characters we met along the way, and set against the pioneering experiences of the early explorers like Flinders, D’Entrecasteaux and Eyre, was first published by Allen & Unwin in 1999. 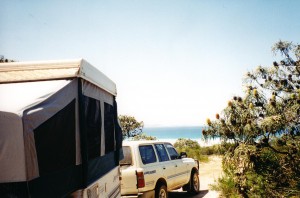 A top campsite, at Thomas River on Cape Arid on the south coast of Western Australia 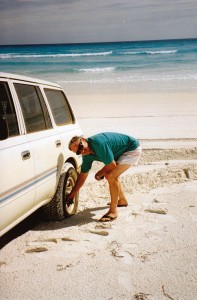 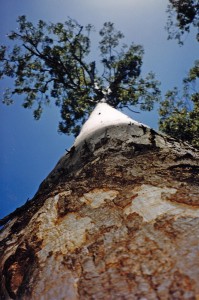 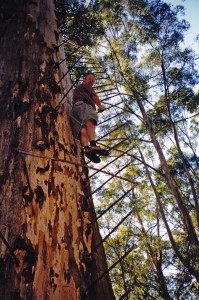 I was silly enough to climb the Gloucester Tree, which carries a fire observation platform 60 metres above the ground. 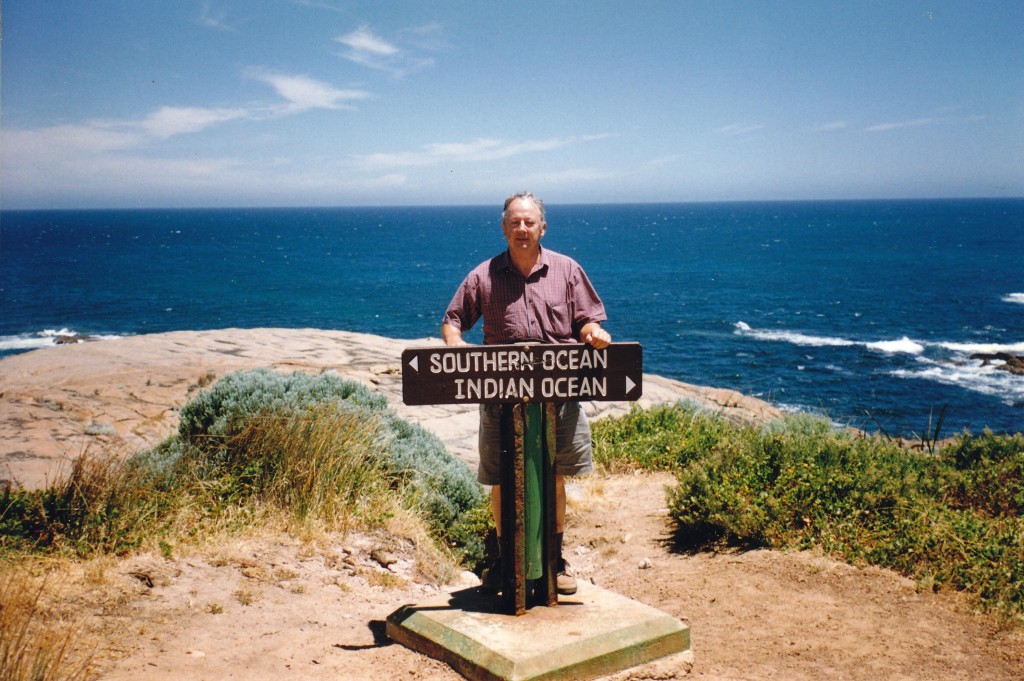 At Cape Leeuwin, where the Southern and Indian Oceans meet

HAPPILY THIS BOOK IS NOW BACK IN PRINT. SEE THE ORDER FORM BELOW.


If you enjoyed this article, please consider sharing it!